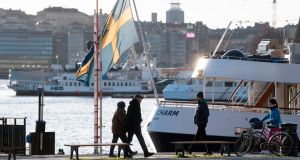 Sweden’s centre-left government has long seemed happy to allow Anders Tegnell, the state epidemiologist, to be the public face of the country’s distinctive approach to handling the Covid-19 pandemic.

But as the second wave has hit Sweden, which resisted a formal lockdown, much harder than its Nordic neighbours – contrary to predictions made by Tegnell in the spring and summer – so the government in Stockholm has stirred into action.

Stefan Lofven, the Swedish prime minister, announced two weeks ago what he called the most intrusive measures in “modern times” in banning public gatherings of more than eight people. That night, Tegnell told Swedish radio that it was not his public health agency “putting our foot down”, and that the ban was less wide-ranging than the prime minister had suggested.

So on Sunday Lofven gave only the fourth ever televised address by a prime minister to the nation, warning that the situation was likely to get worse before it got better and telling Swedes, where non-essential meetings were concerned, to “call it off, cancel, postpone”.

“It’s a mess now, it’s a real mess. It’s a mess because it’s unclear who is really calling the shots. It’s clear there’s a division between the government and the public health agency,” said Nicholas Aylott, associate professor of political science at Sodertorn University.

Marja Lemne, a political scientist who previously worked for the Swedish state for 50 years, said: “There is some kind of a crisis. You don’t have to be a doctor to see that the strategy hasn’t been very successful. There are signs of a split. I wouldn’t say there is definitely is one.”

The backdrop to the debate is a sharp rise in cases, hospitalisations, and deaths in Sweden that is unlikely to peak for another three weeks, according to the health authorities. Sweden has reported 397 Covid deaths in the past nine days, more than either Norway or Finland – each with about half the population – have announced during the entire pandemic.

Such figures led the normally cautious and measured state broadcaster SVT to declare that Sweden’s strategy looked increasingly like “a failure”.

Tegnell and Lofven both deny there is any split between the public health agency and the government. In response to a question from the Financial Times, Tegnell said there was a natural division of labour, with the public health agency putting forward voluntary recommendations while the government issued legal restrictions for restaurants and public gatherings. “There is definitely no division or any new strategy in place. There is full trust from both sides,” he added.

Lofven told Swedish newspaper Expressen: “There is no rift whatsoever. I imagine there sometimes might be a temptation in media to portray conflicts. But here there is none.” Officials point out that the government has regularly presented bills or regulations to do with Covid-19 throughout the pandemic.

Nevertheless, questions are mounting about the differences between Sweden’s policies and those adopted in the rest of Europe – not just over the absence of a lack of formal lockdown, but also on Sweden’s failure to recommend the wearing of face masks outside hospitals, and its reasons for not imposing quarantine on travellers returning from abroad or on children whose parents were infected.

“The government is well aware Sweden is increasingly seen as eccentric internationally,” said Aylott. “The government is jumpy over whether its decision to delegate completely to the public health agency is sensible. Sweden looks out on a limb.”

The Swedish constitution grants independent bodies such as the public health agency great powers, an unusual system of governance that Lofven is keen to uphold. But Lemne said that in 50 years she had “never seen a government completely give in to an agency before”.

However, it is not clear that the government can gain much from playing a more central role in the fight against coronavirus. “The Swedish government’s problem is that it hasn’t owned any of this. To step in now is very tricky for Lofven,” said Aylott.

An opinion poll this week for newspaper Dagens Nyheter showed that 42 per cent of people had strong confidence in Swedish authorities generally, down 13 percentage points in a month. Support for both the public health agency and Tegnell also fell, but was much higher at 59 per cent and 65 per cent, respectively.

“You would have to assume that when the situation worsens that the trust in all different kind of authorities would fall,” said Tegnell. “We don’t see any kind of open protest like we see in many countries in Europe.”

Lemne said it was not clear how things would develop. “The split [between the government and the public health agency] might appear to get larger, or it might blow over.” However, she added that “if this continues, it’s dangerous for democracy and the confidence of the public towards the government and agencies”. – Copyright The Financial Times Limited 2020