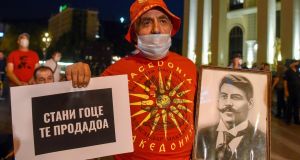 A protester wearing a T-shirt with a former Macedonian flag and holding a photograph of revolutionary figure Goce Delchev and a placard that reads as ‘Get up Goce, they sold you’, during an anti-government protest in Skopje in September.Photograph: Robert Atanasovski/AFP/Getty Images

A dispute with Bulgaria over history, identity and language has prompted calls for North Macedonia’s government to resign and cast fresh doubt on its bid to start European Union membership negotiations this year.

The country formerly known as Macedonia changed its name in 2019 to resolve a 30 year dispute with Greece and remove Athens’ opposition to its EU ambitions, only for Bulgaria to block the start of accession talks this month.

Sofia wants North Macedonia to recognise the Macedonian language as a dialect of Bulgarian, and to correct what it claims are misrepresentations of Balkan history that are allegedly fuelling “hate speech” against Bulgarians.

Nazi-allied Bulgarian forces occupied parts of modern-day North Macedonia during the second World War, but Sofia says references to “fascist Bulgaria” in its neighbour’s history books and on its monuments are stoking hatred.

Bulgaria also wants Macedonian to be referred to as “the official language of the Republic of North Macedonia” in EU negotiations, reflecting Sofia’s view that it is actually a form of Bulgarian.

Sofia also wants to ensure that North Macedonia can never make a claim to any of its territory or assert any link to Bulgaria’s small Macedonian minority.

More broadly, Bulgaria accuses North Macedonia of not observing a landmark 2017 friendship treaty between the nations, under which a joint commission was formed to tackle thorny historical questions.

Mr Zaev told Bulgarian media this week that he understood domestic criticism of his call to move on from old disputes and drop stock phrases like “fascist Bulgaria”.

“But leaders need to lead the country. They need to take the next step . . . Those fellow citizens of mine share the same history as me. The anti-fascist struggle is also part of my family, part of the city where I live, part of my homeland. But that historical past should not limit us in paving the way for our European future.”

Opposition leader Hristijan Mickoski said Mr Zaev should apologise and step down “for his insults towards Macedonian citizens and our ancestors and heroes”.

“It is perfectly clear that Zaev cannot deliver anything good for his country . . . Therefore, we demand Zaev’s immediate and irrevocable resignation,” he said on social media.

Critics of Bulgaria’s government accuse it of targeting North Macedonia to divert attention from months of major protests in Sofia over cronyism and corruption.

Bulgaria’s deputy prime minister Krasimir Karakachanov – leader of the nationalist Bulgarian National Movement that is part of the ruling coalition – said Mr Zaev’s comments were “a small step in the right direction”.