Thanksgiving triggers mass movements in US despite infection warnings 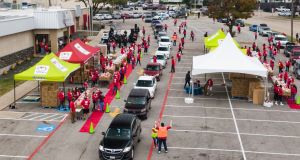 Volunteers hand out over 3,000 complete Thanksgiving meals to those in need at Minnie’s Food Pantry in Plano, Texas. Photograph: Brandon Wade/AP

Millions of Americans are travelling across the country this week for Thanksgiving, despite warnings from the country’s top health experts that increased travel could intensify the spread of coronavirus.

Approximately three million people travelled through American airports last weekend – around half of the usual figure – while many more are taking to their cars to visit family and friends.

Thursday’s holiday, which rivals Christmas in the American calendar, is already being seen as a possible super-spreader event, given the potential for infected people to dine with family and friends.

The Centre for Disease Control and Prevention – America’s top health agency – has encouraged people not to travel, and to limit Thursday’s gatherings to a small group of people. Americans are also advised to dine outside if possible. Top immunologist Anthony Fauci warned that America is facing “a very, very difficult situation at all levels” and pointed to the possibility of infection rates at airports in particular.

The United States has now registered more than 12 million cases of Covid-19, while over 257,000 people have lost their lives to the virus. Hospitalisation rates are also rising, particularly in the mid-west, while east coast cities like New York and Washington have reintroduced restrictions amid an increase in infection rates. Public schools in Washington remain closed, while New York’s mayor ordered schools to close in the city last week.

President-elect Joe Biden said last week that he and his wife would be spending Thanksgiving with just one other person.

President Donald Trump, who is skipping his traditional Thanksgiving vacation at his Mar-a-lago home in Florida, marked the occasion with the traditional turkey pardon at the White House on Tuesday.

In an update on Tuesday, the department of health and human services said that it planned to distribute up to 40 million vaccines by the end of the year. Health secretary Alex Azar said he expected America’s most vulnerable citizens, such as those in nursing homes, in addition to healthcare workers and first responders, to be administered the vaccine first.

Mr Azar said he was concerned about “vaccine hesitancy” but stressed the safety and integrity of the vaccines coming on stream. “We have various checks on the independence of the system,” he said.

Mr Azar urged Americans to be mindful of Covid-19 over Thanksgiving. “I ask all Americans please be on guard, be careful . . . We want to make sure that everyone is here for next year’s Thanksgiving.”