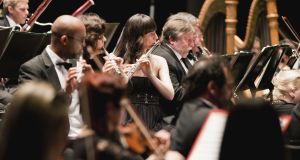 While wind instruments are considered the most tricky in a pandemic, many have a design that actually traps and condenses aerosols internally

Europe’s second wave of Covid-19 may have silenced the continent’s opera houses and concert halls for a second time – but hope is at hand. A new study by Bavarian researchers has thrown light on months of orchestral manoeuvres in the dark, showing that live classical music – even with wind instruments – is less risky than a trip on the U-Bahn.

Most virus transmission occurs from large infection droplets when someone coughs, sneezes or breathes in close proximity to another person.

The Covid-19 pathogen is most commonly found in microscopic air particles called aerosols, which are airborne and breathable, thus social distancing rules and mandatory distances of up to two metres and more between orchestra pit musicians.

But researchers at Munich’s Ludwig Maximilian University (LMU) and the University of Erlangen, working with musicians from the Bavarian Radio Symphony Orchestra, have found the risk from instruments is highly manageable.

For their experiment they placed musicians – individually – in a darkened room, where they were asked to take a puff from an e-cigarette containing nicotine-free fluid and begin playing.

Closely calibrated cameras and laser transmitters recorded what happened next or, more accurately, what didn’t happen next. The aerosol transmission made visible by the smoke was less dynamic than researchers expected and fell well short of two metres in front of most musicians and less than 1.5 metres at the side.

While wind instruments are considered the most tricky in a pandemic, many have a design that actually traps and condenses aerosols internally.

“The trumpet holds back almost everything, with only a very low transmission,” said Dr Stefan Kniesburges, one of the researchers.

A previous study by Dr Kniesburges, with singers from the Bavarian Radio Chorus singing Ode to Joy between puffs of e-cigarettes, showed that, even at the most dramatic moments, singers projected aerosols only up to 1.5 metres in front of them, distances that dropped away drastically to each side.

The Bavarian researchers have one request of impatient orchestras: go easy on the flute repertoire. It may look and sound harmless but the humble wind instrument sprays out aerosols close to three metres to the front and two metres to the side.

“The instruments are less dangerous than we expect and we want to reduce the distance between musicians,” said Prof Matthias Echternach of the LMU. “Beethoven is perfectly possible though perhaps not yet Mahler.”