Covid-19: UK travel restrictions to be lifted over Christmas period 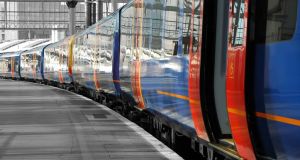 Christmas bubbles will be allowed to meet in one another’s homes, attend places of worship together and meet in outdoor public places. Photograph: iStock

People will be able to travel without restriction throughout the United Kingdom and socialise with up to two other households during a five-day period around Christmas.

The arrangement agreed on Tuesday between the British government and the devolved administrations in Scotland, Wales and Northern Ireland will lift restrictions from December 23rd to 27th. People travelling in either direction between Northern Ireland and Great Britain will be allowed to add an extra day on each side of the five-day period.

Each of the devolved administrations will draw up their own rules on support bubbles and extended households but they have agreed that up to three households should be able to form a single Christmas bubble. Christmas bubbles will be allowed to meet in one another’s homes, attend places of worship together and meet in outdoor public places.

“Even where it is within the rules, meeting with friends and family over Christmas will be a personal judgement for individuals to take, mindful of the risks to themselves and others, particularly those who are vulnerable,” the four administrations said in a joint statement.

“We need everyone to think carefully about what they do during this period, balancing some increased social contact with the need to keep the risk of increased transmission of the virus as low as possible. This is particularly important when considering those who are vulnerable, and before deciding to come together over the festive period we urge the consideration of alternative approaches such as the use of technology or meeting outside.”

The move comes amid growing disquiet among Conservative MPs over a plan to return to a three-tier system of restrictions in England when the current lockdown ends on December 2nd.

Up to 70 Conservative backbenchers could vote against the new restrictions, including Graham Brady, chairman of the 1922 Committee.

“My concern is that huge numbers of businesses, particularly but not exclusively in the hospitality sector, have been losing money under tier 2 already, and there’s a very tight limit to how much longer than they can go on doing without seeing even bigger levels of unemployment, and particularly youth unemployment,” he told the BBC.

“And we know that if we see that big economic hit, in terms of unemployment, in terms of opportunities for young people, the effects – not just economically, but the other health impacts, physical health and mental health – are enormous, and that is the legacy we could be living with for years to come.”

Labour is set to vote in favour of the measures, so there is little danger that the government will suffer a defeat. Britain reported 608 further deaths from coronavirus on Tuesday, the highest daily figure since May. But the number of new cases is falling and Tuesday’s figure of 11,299 was the lowest for seven weeks.