Cleo Watson, a close associate of Dominic Cummings, is to leave Downing Street 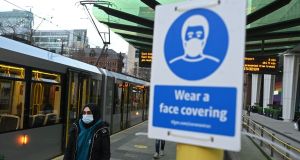 Waiting to board a tram in Manchester. Photograph: Oli Scarff/AFP via Getty Images)

Boris Johnson faced a Conservative backlash on Thursday night after he announced that one-third of England’s population would remain under the highest level of restrictions when the coronavirus lockdown ends next week.

Under a strengthened three-tier system, only three regions will face the lowest Tier 1 restrictions and most of the country, including London, will be in the intermediate Tier 2.

The whole of the northeast, much of the midlands and parts of the southeast including Kent will be in Tier 3, under which all hospitality venues must close except for delivery and takeaway. Indoor entertainment venues will remain closed and indoor mixing with anyone outside the household is forbidden.

“I really wish it were otherwise, but if we are to keep schools open – as we must – then our options in bearing down on the disease are necessarily limited. What we will do is continue taking every possible step to protect jobs and livelihoods across the UK,” Mr Johnson told a press conference in Downing Street.

He said regions were put into tiers on the basis of a number of criteria, including the rate of increase or decrease in cases, the extent to which people over 60 are affected and pressure on local healthcare resources. He said the allocation of tiers will be reviewed every 14 days starting on December 16th and that regions that fared well could be moved into a less restrictive tier.

“Your tier is not your destiny. Every area has the means of escape. And I have no doubt that together we can get through this winter, suppress the virus until vaccines come to our aid, and then reclaim our lives and all the things that we love,” he said.

Conservative MPs whose constituencies fall under Tier 3 restrictions expressed outrage and the backbench Covid Recovery Group described the system as “authoritarianism at work”. Graham Brady, chairman of the 1922 Committee of Conservative backbenchers, said he would vote against the regulations next week.

“I have severe reservations on so many different levels. I do think that the policies have been far too authoritarian. I think they have interfered in people’s private and personal lives in a way which is unacceptable,” he said.

“When we look at the experience in particular of places like greater Manchester, which actually have barely been out of restrictions for the last eight months, I think there is a limit to what it is reasonable to expect communities to absorb.”

Mr Johnson’s offer of the position of chief of staff to Lee Cain, another Vote Leave campaign veteran, triggered a power struggle within Downing Street that led to the departure of Mr Cain and Mr Cummings.