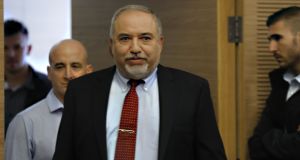 Avigdor Lieberman, as he resigned as Israel’s defence minister on Tuesday. “Were I to stay in office, I would not be able to look southern residents in the eye,” he said after rocket attacks from Gaza. Photograph: Menahem Kahana/AFP/Getty Images

“As far as I’m concerned, what happened yesterday – the truce combined with the efforts to reach a long-term arrangement with Hamas – is capitulating to terror. It has no other meaning,” Mr Lieberman said in a dramatic news conference.

Israel reached a ceasefire with militant groups in Hamas earlier this week after the most serious outbreak of violence since the Israeli bombardment of Gaza in 2014. Eight people were killed on Monday and Tuesday as militants fired 460 rockets towards Israel and Israeli forces bombed 160 targets in Gaza.

Mr Lieberman claimed that in negotiating with Hamas, Israel was “buying short-term quiet, with the price being severe long-term damage to national security”. He also criticised the military’s response to the militant rocket barrage into southern Israel.

“To put it mildly, our response was drastically lacking after 500 rockets were fired at us,” he said.

Mr Lieberman’s resignation will go into effect 48 hours after he submits a formal letter to prime minister Binyamin Netanyahu. The withdrawal of Mr Lieberman’s Yisrael Beiteinu party from the coalition leaves Mr Netanyahu with a wafer-thin majority of 61 of the 120 seats in Knesset parliament, a year before Israel’s next election.

However, the prime minister, who faces a number of corruption scandals and may possibly face a criminal indictment in the coming months, appeared reluctant to declare early elections, insisting that the aim is now to stabilise the coalition.

His first big challenge is an ultimatum from Naftali Bennett, leader of the far-right Jewish Home, be appointed as defence minister to replace Mr Lieberman. Mr Bennett also opposes the truce with Hamas and has long advocated toppling the Hamas regime in Gaza.

Always a maverick, before becoming defence minister Mr Lieberman said he would give Hamas leader Ismail Haniya 48 hours to hand over two detained Israeli civilians and the remains of two soldiers killed in the 2014 conflict “or you’re dead”. But once in office he exhibited statesmanship and listened to the advice of the military and intelligence echelons who cautioned against a conflagration with Hamas.

Mr Lieberman said he fundamentally disagreed with Mr Netanyahu on a number of key issues, including the government’s green light for €13 million to be transferred in cash from the Qatari government to Hamas on Friday.

“I opposed it. The prime minister needed to write an executive order for it to go above my head,” Mr Lieberman claimed, saying that the money went to the families of activists killed in border clashes with Israeli troops.

He said he decided to quit because “I could not remain in office and still be able to look residents of the south in the eyes.”

Speaking just before Mr Lieberman’s resignation, Mr Netanyahu, who will take the defence portfolio for the time being, defended the ceasefire decision, saying that “in times of emergency, when making decisions crucial to security, the public can’t always be privy to the considerations that must be hidden from the enemy”.

Hamas described the resignation a “political victory for Gaza” as activists handed out sweet biscuits on the streets.

“Lieberman’s resignation is an acknowledgment of defeat of Israel’s helplessness against the Palestinian resistance,” Hamas, which rules Gaza, said in a statement.