The White House revoked the credentials of CNN's Jim Acosta after he asked Donald Trump about immigration during a press conference and Trump refused to answer his questions. 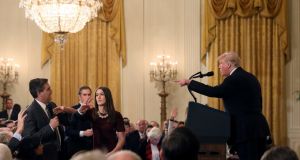 A White House staff member reaches for the microphone held by CNN’s Jim Acosta as he questions US president Donald Trump during a news conference last week. Photograph: Jonathan Ernst/Reuters

CNN has filed a lawsuit against the Trump administration over its decision to revoke the press credentials of the network’s chief White House correspondent Jim Acosta.

The lawsuit, which was lodged in Washington on Tuesday morning, cites the first amendment rights of the freedom of the press and the right to due process enshrined in the fifth amendment to the constitution. US president Donald Trump is named as a defendant, as are press secretary Sarah Huckabee Sanders, chief of staff John Kelly, deputy chief of staff for communications and former Fox executive Bill Shine, and secret service officials.

“We have asked this court for an immediate restraining order requiring the pass be returned to Jim, and will seek permanent relief as part of this process,” the network said in a statement. “While the suit is specific to CNN and Acosta, this could have happened to anyone.”

But the White House said it would “vigorously defend” itself. In a statement Ms Huckabee Sanders said the lawsuit was “just more grandstanding from CNN”. She said Acosta “physically refused to surrender a White House microphone to an intern, so that other reporters might ask their questions”, adding: “This was not the first time this reporter has inappropriately refused to yield to other reporters.”

The filing of the case significantly escalates the battle between CNN and the US president, which has been ongoing throughout the Trump presidency. Mr Trump has frequently clashed with the network, which he has accused of being the purveyor of “fake news”.

The conflict reached an apotheosis last week when the White House revoked Acosta’s press credentials after he verbally clashed during a press conference with Mr Trump, who told him to “put down the mic” .

“The first amendment is not served when a single reporter, of more than 150 present, attempts to monopolise the floor,” Ms Huckabee Sanders said in her statement. “If there is no check on this type of behaviour it impedes the ability of the president, the White House staff and members of the media to conduct business.”

There appears to be only one previous instance in US history when an administration banned a reporter; Robert Sherill of the Nation was denied secret service security clearance during Lyndon Johnson’s administration as he had become embroiled in a fistfight with one of the president’s campaign aides. He later successfully sued in court.

In a statement, lawyers for CNN and Acosta said that the US supreme court “has held in no uncertain terms that the first amendment protects ‘robust political debate’ including ‘speech that is critical of those who hold public office’. Mr Acosta’s press credentials must be restored so that all members of the press know that they will remain free to ask tough questions, challenge government officials, and report the business of the nation to the American people.”

The White House Correspondents’ Association said the organisation “strongly supports” the stance taken by CNN. Describing the Trump administration’s reaction to last week’s incident as “disproportionate”, its president, Olivier Knox, said: “The president of the United States should not be in the business of arbitrarily picking the men and women who cover him.”