Japan struggles to halt its shrinkage 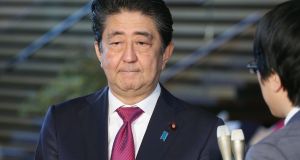 For years Japan has been anxiously mulling whether to import more foreigners to stem a shortage of workers. That debate seems to have been partially resolved this month with a controversial decision by the cabinet of prime minister Shinzo Abe to change the nation’s visa rules.

To the horror of the right-wing media, this may mean another 500,000 foreign nationals living in the country by 2025. Abe, a staunch nationalist, sees this a compromise between meeting the demands of the business class for more labour and assuring his base that he will protect Japan’s ethnic homogeneity.

Yet, relatively speaking the new imports will be a drop in the bucket. The nation’s working-age population has fallen by over 10 million since 1997. The foreign-born population is still just 2.6 million, or roughly 2 per cent of the population, far below most other developed countries, including Ireland.

Many of new imports will be guest workers who, if precedent is any guide, will eventually leave. More than 350,000 South Americans of Japanese descent were allowed to settle during a labour crunch in the 1980s; when the economy soured a decade ago they were offered one-way airplane tickets home.

Japan has tried hard to avoid inviting them back. It now employs more women as a percentage of its workforce than America. Millions of elderly people fill payrolls. The government said this year it would allow them to start drawing their state pensions after the age of 70. The Japan Geriatrics Society, a lobby group, says retirement age should be stretched to 75.

Postponing retirement has helped thwart predictions that the welfare system will buckle under the strain of looking after the elderly. Japan spends 10.2 per cent of its gross domestic product on healthcare, leaving it about a third of the way down the list of 35 countries in the OECD. Expenditure is growing steadily but it’s still far lower than America (16.9 per cent), and with better outcomes. Japan has universal coverage since 1961.

That’s partly the result of state controls more reminiscent of China than America. Every two years, the health ministry adjusts the prices for all medical procedures and drugs, and haggles for reductions with doctors, hospitals and companies. The over-40s must make mandatory payments for long-term care for the elderly.

A national system of annual check-ups helps detect health problems before they metastasise into costly procedures. Basic benefits for people who need them have stayed remarkably steady, says John Creighton Campbell, a political scientist. He calls Japan’s system of long-term care for the elderly the best in the world: “Japan foresaw its ageing crisis decades ago.”

Abe’s plan is to halt the population decline at 100 million (it’s currently 127 million). Yet, though the fertility rate has ticked up since bottoming out at 1.26 in 2005, few experts believe his target of 1.8 is attainable. Immigration of the level he supports will not close the gap either.

The priority for local governments as the population declines is stopping the exodus of the young to big cities and keeping their taxes low, says Masashi Mori, mayor of Toyama, a city of 420,000 people. By offering subsidies and other incentives, Toyama has persuaded thousands of elderly people to move closer to public transport lines around the city centre, cutting the tax burden and improving their quality of life. Ultimately, he says, depopulation is irreversible.

Like the air hissing out a giant balloon, Japan may be destined to slowly shrink. Yet, its problems are hardly unique. Fertility rates are falling across the developed world. By 2050, the global elder population will more than triple to 2.1 billion people, says the World Bank. Eventually, the tributary of fresh immigrants that has fed the advanced economies will dry up. Japan is at the vanguard of changes happening everywhere, says Junko Edahiro, an environmental campaigner.

Edahiro says the national government is still obsessed with what she calls “unrealistic” targets for economic and population growth. “No country can keep growing forever.” But across Japan, local politicians like Mori have started to confront having fewer people and to devise strategies for a soft landing. Everybody should be watching Japan, says Edahiro. “This is the future.”