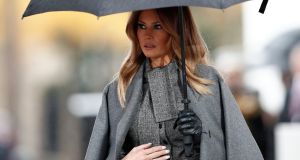 She bad-mouthed the US defence secretary. She was the hatchet woman for John Bolton, the famously combative national security adviser, and drove out staff members from the US national security council who were deemed insufficiently conservative or loyal.

But in disparaging two members of Melania Trump’s staff who travelled with the first lady on her trip last month to Africa, Mira Ricardel, a deputy national security adviser, apparently went too far. In a White House where the drama has been constant, but almost always behind the scenes, an email to reporters on Tuesday from Stephanie Grisham, a spokeswoman for the first lady, was unusually direct: “It is the position of the Office of the First Lady that she no longer deserves the honour of serving in this White House.”

The email was sent less than an hour after Ms Ricardel appeared at an official White House event with US president Donald Trump. There were nonetheless conflicting reports by late afternoon on whether Ms Ricardel had actually been fired. The Wall Street Journal reported that she was brusquely escorted off the grounds of the White House, only to be corrected an hour later by two White House aides, who said that Ms Ricardel, who could not be reached for comment, was still employed.

For weeks, Melania Trump had warned her husband’s aides that Ricardel, who is widely distrusted among West Wing staff, was spreading negative stories, including about the first lady, two people familiar with the discussions said. But the fact that Ms Ricardel was in limbo on Tuesday reflected an unusual amount of muscle-flexing by the first lady – who normally avoids internecine palace intrigue – as well as the limits of her influence. It also showed the obstinance of Ms Ricardel’s boss, Bolton – who has a reputation as a shrewd player in a chaotic White House and as someone who is not intimidated, even by the president’s wife.

Melania Trump then complained to John Kelly, the White House chief of staff, about Ms Ricardel, and Kelly raised the issue with Bolton, two White House officials said. Mr Kelly is theoretically Mr Bolton’s boss, but the national security adviser has so far refused to remove Ms Ricardel, who was spotted in her office late Tuesday afternoon.

A fixture in Republican foreign policy circles, Ms Ricardel has honed a reputation as a hawk on policy and as a hard-edge bureaucratic infighter. During the early 1990s, she advised US senator Bob Dole on the Balkans, drawing on her own Croatian background, and later worked for US defence secretary Donald Rumsfeld in former US president George W. Bush’s administration.

After supporting Donald Trump for president, she was named to head his Pentagon transition team. In that capacity, she clashed with Jim Mattis, Trump’s choice for secretary of defence, stopping him from hiring Anne Patterson as under secretary of defence for policy, and rejecting more than a dozen of Mr Mattis’ other proposed nominees for that job.

Mr Mattis, in turn, later tried to block Ms Ricardel when she was considered for posts in the Trump administration, though she eventually served as undersecretary of commerce for export administration before Bolton brought her to the US national security council.

Ms Ricardel, administration officials said, suspected Mr Mattis of trying to load up the Pentagon with Democrats and supporters of Hillary Clinton’s 2016 presidential campaign. Not long after Ms Ricardel’s arrival at the national security council, Donald Trump went on CBS’ 60 Minutes and said he believed that Mr Mattis was a Democrat.

The drama surrounding Ms Ricardel was the highlight of a day of rampant speculation about personnel moves that the president might be contemplating. Three people said that Trump is almost certain to fire Kirstjen Nielsen, the secretary of homeland security, who has long been a target of the president’s displeasure. And Kelly’s fate is believed to be tied to what happens to Nielsen.

Inside the White House, removing Nielsen – who was Kelly’s top aide when he was secretary of homeland security – is seen as a way for Trump to push out Kelly without actually having to fire him. Nick Ayers, the chief of staff to Vice President Mike Pence, is seen as a replacement for Kelly, if he leaves.