Spain’s judges back in spotlight after ‘lack of impartiality’ verdict 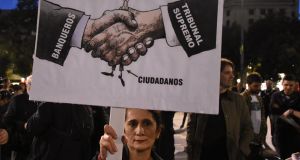 A woman holding a placard against the supreme court decision that clients and not banks pay the tax on mortgages. Photograph: Ramon Costa/SOPA Images/LightRocket

It was a scene many Spaniards had dreaded. On November 6th, Arnaldo Otegi, the leading Basque separatist politician who once served jail time for his involvement with terrorist group Eta, hugged his lawyer and hailed what he called a moment of “poetic justice”.

The European Court of Human Rights had just ruled that the 2010 trial of Otegi and four others before Spain’s high court, for allegedly reforming the outlawed Batasuna party, had been flawed. The Strasbourg tribunal had found that the presiding Spanish judge in the case, Ángela Murillo, who jailed the five defendants, “had shown a lack of impartiality” due to comments she had made during a separate trial of Otegi.

This case was particularly noteworthy, because of its international dimension. But it was just one of several which have dealt a blow to the image of the Spanish judiciary at a time when it has been forced into the spotlight.

On the same day, Spain’s supreme court performed a dramatic U-turn on a ruling it had made two weeks earlier on who should pay a mortgage tax. In the initial decision, the court had ruled that banks, not their customers, should pay, signalling a major change. As banks braced themselves for a flood of lawsuits from customers reclaiming the taxes they had paid in the past, the supreme court announced it was taking the unprecedented move of reconsidering its own ruling.

In its revised judgment, the court decided that bank customers should pay the tax after all, to the relief of the financial sector and the outrage of many Spaniards.

“The mortgage tax ruling has been the last straw and Spain cannot afford to see yet another case like this,” noted political commentator José Antonio Gómez. “The biggest pending revolution of our democracy is that which should take place in the courts.”

Other, very different, cases have also put some of the country’s main tribunals in the eye of the storm. In recent months, the high court has handed a string of jail sentences to rappers, artists and Twitter users for terrorism-related offences. The Mallorcan rapper Josep Miquel Arenas, known as Valtònyc, has fled to Belgium, to avoid a 3½-year sentence for threats, glorifying terrorism and insulting the monarchy in his lyrics. Arenas has claimed that his prosecution is part of a far-right conspiracy to muzzle leftist voices. Now a poster-boy for freedom of speech activists, he is waiting to see if he will be extradited.

Among those supporting him are Catalan nationalists. Nine independence leaders have been in custody for the last year or so awaiting a trial for their role in Catalonia’s failed bid for secession in 2017. Earlier this month, the attorney general’s office confirmed it will seek jail terms of up to 25 years for them and nine other defendants in the trial, which is likely to be the most politically significant Spain has seen for decades although it still has no date.

With the independence movement casting the justice system as an undemocratic tool of unionist forces in Madrid, the Catalan impasse has magnified the political repercussions of every judicial decision related to it.

Carles Puigdemont, the exiled former president of Catalonia, scored a victory against the Spanish supreme court earlier this year when a German tribunal refused to extradite him on rebellion charges. Since then, Puigdemont has placed Spain “alongside Kazakhstan among the criminal states which refuse to submit to the principles that govern fundamental universal rights.”

In Spain, political parties have always tried to exert substantial control on the justice system

Such opinions are exasperating to many, particularly on the political right and within the judiciary itself. The APM conservative judges’ association has defended the legal action being taken against the Catalan independence leaders as having full guarantees and it has rejected claims that the defendants are political prisoners. In recent days, the same organisation has warned of how “easy it is right now to join those who promote the discrediting of the Spanish justice system”.

Yet a 2018 European Commission Scorecard, which ranked public confidence in the independence of countries’ courts and judges, placed Spain a lowly 23rd, behind Romania and Latvia (Ireland was sixth).

“In Spain, political parties have always tried to exert substantial control on the justice system,” the magistrate Joaquim Bosch, co-author of a recent book about failings in the country’s judiciary, told The Irish Times.

Bosch points to the General Council for the Judiciary (CGPJ) as a root of the problem. Its members are appointed by politicians and it in turns selects top-ranking judges, embedding political preferences into the system’s upper echelons. “If you don’t appoint the very best people then there will always be a suspicion that those who have links to political power are the ones being promoted,” he said.

Many within the judiciary are also unhappy at what they see as a lack of resources. The government has been trying to negotiate with judges and prosecutors in recent days in an effort to persuade them not to stage a strike next week, the second such action they have organised this year.

One indicator of how Spaniards’ view of their magistrates has changed has been visible since April, when a court in Navarre controversially absolved five men of raping a woman in 2016, in the so-called “Manada” case. Such was the vilification of the three judges involved that they now reportedly have bodyguards.

Many believe the judiciary started losing prestige before both that case and the Catalan conflict, during Spain’s economic crisis. The torrent of corruption and bank mismanagement cases from that period left courts inundated and, in some cases, behaving in ways that were seen to favour economic and political powers.

This winter, Spain is commemorating 40 years of its constitution, the document that laid down the foundations for its entire democratic system. But with one of its key institutions struggling for credibility, the celebrations will be somewhat muted.

1 Coronavirus: Varadkar returns to practising medicine to help during crisis
2 Donald Trump’s clown car administration has put the fear in all of us
3 Coronavirus: Boris Johnson in hospital for tests as symptoms persist
4 Robbie Lawlor profile: A feared criminal with a long list of enemies
5 Coronavirus: Co Tyrone couple buried together after dying 20 hours apart
Real news has value SUBSCRIBE