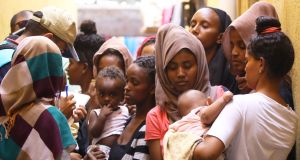 Migrants in the Ganzour centre in the Libyan capital Tripoli in September. Photograph: Mahmud Turkia/AFP/Getty Images

A young Eritrean man tried to take his own life in a Libyan migrant detention centre on Monday, three weeks after a Somali man died by suicide in the same centre, according to detainees who found him there.

The Eritrean man’s attempt highlights the growing desperation among refugees and migrants returned to Libya, under EU policies aimed at stopping migration to Europe.

Refugees and asylum seekers in detention in Libya say they feel increasingly distressed about their chances of being evacuated to a safe country.

Last Friday, that desperation turned to protest when hundreds of detainees managed to break out of Tripoli’s Sebha detention centre, marching through the streets while calling for international help.

In Tripoli’s Triq al Sikka centre, 28-year-old Abdulaziz took his own life three weeks ago, after telling friends he had lost hope of evacuation. His suicide was confirmed by the International Organisation for Migration (IOM), and the United Nations Refugee Agency (UNHCR).

Last weekend, a 19-year-old Eritrean also reportedly died in Zintan detention centre, 180km southwest of Tripoli. His uncle said the teenager was suffering from an illness exacerbated by the conditions there.

Some 262 refugees were evacuated to Niger by the UNHCR on Monday, where they’ll wait for resettlement to other countries. However, the number of places being offered is very small when compared to the need.

Detainees who fled war or dictatorships in countries such as Eritrea, Somalia, and Sudan say they’re now asking their families to raise thousands of dollars to pay for them to try to cross the Mediterranean again, though their chance of success is low.

Others say they feel forced to contemplate returning to their countries of birth, despite grave risks. One Somali man, who says he fled because he is gay and was worried he might be killed, told The Irish Times he is considering going back to Somalia. “There is no [other] way, even though I’m going to suffer a lot,” he said.

Another Somali, aged 21, was shot and killed in a Tripoli street this weekend by Libyan smugglers who were trying to kidnap him, according to friends.

Since last year, there has been a nearly 80 per cent drop in the numbers of people arriving in Italy across the Central Mediterranean, from 114,415 between January and November 2017 to just 22,232 so far in 2018.

This week, Italy held a two-day conference in Palermo, aimed at restoring peace to war-torn Libya.