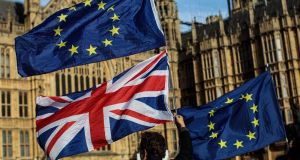 The EU and the UK have reportedly agreed the main details of the withdrawal agreement. Photograph: Getty

The EU and UK have reached a deal on a draft Brexit withdrawal agreement, including a mechanism to guarantee that there will be no hard border on the island of Ireland.

The Irish Times understands that the agreement, which runs to hundreds of pages, includes a UK-wide customs backstop with provisions for extra alignment with EU rules in Northern Ireland.

The breakthrough came with an agreement on a review mechanism that would determine when the backstop is no longer necessary to ensure that the Border remains open after Brexit.

The backstop is an insurance policy written into the withdrawal agreement guaranteeing no harder border on the island of Ireland. It would only be used as a last resort or the default option if the EU and UK cannot reach an overarching free trade deal that would make trade so frictionless that there would be no border between the EU and the UK, including on the frontier between Northern Ireland and the Republic.

The arrangement on the future backstop was first reported by The Irish Times last week.

Downing Street offered no details of the draft agreement and officials in Brussels and Dublin also declined to comment.

“Cabinet will meet at 2pm tomorrow to consider the draft agreement the negotiating teams have reached in Brussels, and to decide on next steps,” a Downing Street spokesman said. “Cabinet ministers have been invited to read documentation ahead of that meeting.”

A number of Mrs May’s ministers have come to and left 10 Downing Street this evening. All have so far declined to answer any questions from reporters as they departed.

EU chief Brexit negotiator Michel Barnier is understood to have briefed EU commissioners on the emerging agreement on Tuesday afternoon.

The Cabinet in Dublin is also likely to hold a special meeting tomorrow to sign off on the proposal. However, Taoiseach Leo Varadkar, Tánaiste Simon Coveney and Minister of State for European Affairs Helen McEntee are expected to meet tonight to assess the draft agreement.

The agreement involves the UK remaining in a customs union with the EU for a period after Brexit and specific other measures to ensure no border checks are needed on the island of Ireland.

Close attention will be paid to the terms on which the UK would be able to leave the customs union, with the deal believed to include three options.

One will be the conclusion of a long-term trade agreement between the EU and UK, the terms of which would guarantee no border checks on trade.

Sources in Dublin believe that the outline agreement offers sufficient guarantees in relation to the Border. However, the specifics of this will be closely examined by all sides and Mrs May will have to win the support of her cabinet, which has been deeply divided when it comes to the best way forward on Brexit.

Tory Brexiteer Boris Johnson, the former UK foreign secretary who is now on the backbenches, said he had not seen the full details but what had been reported was “utterly unacceptable to anyone who believes in democracy”.

“For the first time since partition Dublin under these proposals will have more say in some aspects of the government of Northern Ireland than London. I don’t see how you can support it,” he said.

The backstop agreed centres on the so-called UK-wide arrangement, where the whole of the UK would remain in a customs union with the EU for a period after Brexit. Specific other measures will be included for Northern Ireland.

The detail of the arrangement will be closely monitored by the DUP, who have objected to anything which would represent a new barrier to trade between the North and Britain. The DUP is key to guaranteeing Mrs May’s government a majority in Westminster.

In a statement on Tuesday night, DUP leader Arlene Foster said her party wants “a sensible deal” which works for the North, the UK and the Republic.

“But our desire for a deal will not be superseded by a willingness to accept any deal,” she said.

“An agreement which places new trade barriers between Northern Ireland and Great Britain will fundamentally undermine the constitutional and economic integrity of the United Kingdom. That is not acceptable.

“Over time, such a deal will weaken the Union. No unionist Prime Minister could argue that such a deal is in the national interest...It would be democratically unacceptable for Northern Ireland trade rules to be set by Brussels. Northern Ireland would have no representation in Brussels and would be dependent on a Dublin government speaking up for our core industries.”

The party’s deputy leader Nigel Dodds, who said he had not yet seen any draft deal, predicted that the agreement would be a “hard sell” for Mrs May.

The key issue in the last few days is understood to have been demands from the other EU members that the UK give sufficient guarantees to ensure its businesses will be operating on a level playing field if the UK remains in the customs union after quitting the bloc.

Responding to the reports that a deal had been agreed, a spokesman for Mr Coveney stressed that negotiations had not yet been completed.

“We are not commenting on media speculation around the Withdrawal Agreement. Michel Barnier and the Taskforce are charged with negotiating with the UK and we have been in constant communication with them throughout.

“The Brexit negotiations are extremely sensitive and the government will comment further in due course.”

Former UK Brexit secretary David Davis, a hardline Brexiteer, said the development was “the moment of truth” in the process of leaving the EU.

“Do we pursue a future as an independent nation or accept EU domination, imprisonment in the customs union and second class status,” he said. “Cabinet and all Conservative MPs should stand up, be counted and say no to this capitulation.”

Biden urges US mask mandate to deal with Covid-19 pandemic 21:48
US urges Arab and Muslim states to follow UAE deal with Israel 21:36
Coronavirus: Germany sees highest number of new cases in over three months 21:16
US plans changes to shower rules after Trump complains about washing his hair 20:17
Belarusian workers back protests to pile pressure on president Lukashenko 19:07