Transatlantic Commission on Election Integrity sets out to prevent interference 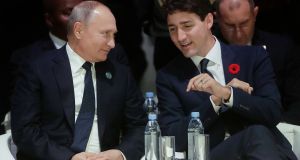 “My fellow Americans, an hour ago I learned that Russia had begun preparing its nuclear arsenal. I immediately ordered the United States’ armed forces to launch a pre-emptive nuclear strike. Seconds ago I was told that Russia has launched a counterstrike at the continental US. We anticipate that many of these missiles will reach their targets. Make peace with God and your family. God bless America.”

The voice is that of US president Donald Trump, reshaped by artificial intelligence software to pronounce a pre-written script. A data scientist with two hours of recorded Trump speech processed it through an algorithm.

The chilling announcement, reminiscent of Orson Welles’s 1938 radio broadcast about an invasion of earth by Martians, was played on Monday at the Paris Peace Forum to show the challenge faced by the newly formed Transatlantic Commission on Election Integrity.

“A deep fake video animates a person’s face and adds a voice track, to make a leader or a celebrity say whatever one wants,” the former Danish prime minister and former secretary general of Nato, Anders Rasmussen, explained to the Anglo-American Press Association on the sidelines of the peace forum.

“Currently you need sophisticated editing skills, a voice actor . . . But we estimate within two years it will be possible to create videos from the comfort of a living room, using computers to animate the face and replicate the voice . . . Artificial intelligence could make interference tactics available to anyone with just a bit of technological knowledge,” Rasmussen said.

Rasmussen founded the commission earlier this year with Michael Chertoff, who was George W Bush’s secretary of homeland security from 2005 until 2009. Their goal is to raise awareness of foreign – mainly Russian – meddling in elections in western democracies, and to promote preventative measures.

In total, Rasmussen said, “The Kremlin has interfered in close to 10 elections in two years, with impunity . . . We see a lot of investigations into what happened [in the US] in 2016, but not much focus on future.”

Rasmussen believes Trump would have won key swing states that ensured his election regardless of Russian interference, because the Rust Belt suffered from globalisation. “What the Russians do is only to exploit the lack of delivery from our own leaders in democratic societies.”

Rasmussen, who is a non-staff adviser to Ukrainian president Petro Poroshenko, anticipates Russian meddling in next year’s presidential and parliamentary elections in Ukraine. “I consider Ukraine ground zero when it comes to Russian attempts to interfere in foreign elections,” he said.

In 2005, Russian president Vladimir Putin said the collapse of the Soviet Union was the greatest catastrophe of the 20th century. Two years later, there was a cyberattack by Russia on Estonia.

“Since 2016 we saw interference in the Brexit campaign, in Catalonia, in Macedonia, in French and Italian elections,” said Rasmussen. “I don’t think the Russians intend to pursue any specific ideological goal other than to undermine the credibility of our democratic institutions and processes.”

When the US retreats and retrenches, they will leave behind a vacuum that will be filled by the bad guys

The EU devotes €1 million annually to such problems, Rasmussen continued, equivalent to one month’s spending by the Russian Internet Research Agency, known as the “St Petersburg troll farm”.

Rasmussen believes the transatlantic alliance will survive Trump’s presidency. “In the worst case, he will be around until 2024. There is a clear risk he will be re-elected in 2020, so we will have to deal with it,” he said. Chertoff, who served a Republic administration, said he “strongly agreed”.

In the meantime, “When the US retreats and retrenches, they will leave behind a vacuum that will be filled by the bad guys, and that’s exactly what we are seeing now,” Rasmussen said. “Putin, Xi Jinping, Kim Jong-un, Assad . . . they are all filling the gap, the vacuum left because of growing isolationism in the US.”

Journalists detected a certain hypocrisy in Rasmussen and Chertoff’s undertaking. Hasn’t the CIA been interfering in foreign elections for decades, I asked. This was the case in the 1950s, Chertoff admitted. “It’s now 70 years later . . . I don’t think in recent history the US is engaged in campaigns where they hack into things in order to disseminate embarrassing information about candidates or they masquerade as Russian social media.”

It was, Rasmussen said, a struggle between “freedom and democracy and oppression and dictatorship”. Was that credible, another journalist asked, if you are a Palestinian watching the US support Israeli settlements, or an Egyptian living under Abdel Fattah al-Sisi?

“We have during the world’s history seen examples of coalitions between democracies and autocracies to fight an evil that was even bigger,” Rasmussen said.

In a Pew Research Center study published in August 2017, 38 per cent of respondents across 30 countries said the US was “a major threat” to their country. About three in 10 named China or Russia. “To the extent you see that result, that is exactly what the Russians have been trying to propagate,” Chertoff said.