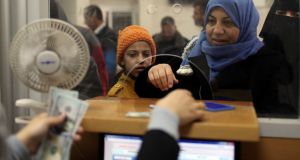 Civil servants in Gaza received their salaries on Friday after Qatar transferred more than €13 million in cash with Israel’s blessing.

Long queues formed outside banks from early in the morning as some recipients held up signs reading “Thank you Qatar.”

The Gulf state has promised to make six monthly payments to alleviate the humanitarian crisis in Gaza and Thursday night’s transfer was the second instalment.

The arrangement is part of a wider deal, brokered by Egypt and the United Nations Middle East envoy Nickolay Mladenov, to restore quiet to the Gaza border after months of violence which brought Israel and Hamas close to another war on more than one occasion.

In addition to paying civil servants, Hamas is also handing out money to some 50,000 needy families.

Israeli prime minister Binyamin Netanyahu rejected criticism from right-wing politicians that Israel was effectively paying protection money to Hamas in return for quiet on the border. He justified the cash transfer by saying that after Palestinian president Mahmoud Abbas decided to separate the West Bank from the Gaza Strip, Israel had no choice but to allow the transfer of Qatari funds in order to prevent a humanitarian disaster.

Despite the relative calm over the last few weeks, UN envoy Mr Mladenov warned that the risk of another war in Gaza is ever present.

“Whichever way you look at Gaza, whether from a political or a security or a humanitarian perspective, the risk of an escalation is very real,” he warned. This is the case, he said, even though, “from a strategic perspective, no one has an interest in another war in Gaza”.

Meanwhile, Hamas on Friday thanked UN member states after an American attempt to pass a resolution in the General Assembly condemning Hamas for its rocket fire at Israel failed because it did not receive the necessary two-thirds majority.

Hamas thanked the countries “that stood by our people’s resistance and the justice of their cause” and attacked outgoing US ambassador to the UN Nikki Haley, who, it said, “is known for her extremism and her positions that support the Zionist terrorism in Palestine”.

Mr Abbas, whose Fatah party is locked in a bitter struggle with Hamas, also welcomed the resolution’s defeat, saying: “The Palestinian presidency will not allow for the condemnation of the national Palestinian struggle.”

Mr Netanyahu described the vote as an “important achievement”, pointing out that although the necessary two-thirds majority was not obtained, this was the first time that a majority of countries had voted against Hamas.