Nations to gather at Marrakesh to approve UN migration pact 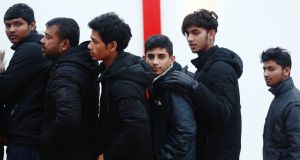 Migrants intercepted off the coast in the Mediterranean Sea line up after arriving on a rescue boat at the port of Malaga in Spain. Photograph: Jon Nazca/Reuters

Worldwide, the number of migrants has increased to more than 250 million, or just over 4 per cent of the world’s population.

Sixty eight million of them, according to the UN’s High Commission for Refugees, are forcibly displaced as a result of persecution, conflict or generalised violence, a rise of more than 50 per cent in the last 10 years.

The challenge of dealing with these elemental population flows has become one of the great political dividers of our age. And to date it has prompted a wide range of largely national solutions. Within the EU, ministers only this week again demonstrated the difficulty of producing co-operative cross-national solutions as they deadlocked again in their debate on reform of the union’s asylum system.

On Monday, however, 180 nations will gather in Marrakesh to approve the UN’s first serious attempt at a co-ordinated approach, the Global Compact for Safe, Orderly and Regular Migration, which was finalised in July following 18 months of negotiations.

But with populist movements the world over banging the anti-immigrant drum, the compact, which will not be legally binding, has nevertheless polarised member states. The United States quit negotiations last December, and was followed by Hungary seven months later.

Since then, Australia, Israel, Poland, Slovakia, the Czech Republic, Austria – the current EU presidency – Switzerland, Bulgaria, Latvia and the Dominican Republic have either publicly disavowed the pact or notified the United Nations they are not participating.

Belgium’s government is split and may yet fall over the issue, although prime minister Charles Michel has won the backing of parliament, against his right-wing coalition partner, to attend.

“The compact fails,” he claims, “adequately to distinguish between people who enter Australia illegally and those who come to Australia the right way – particularly with respect to the provision of welfare and other benefits.”

Then US secretary of state Rex Tillerson, channelling President Donald Trump, said last December that migration was an issue for domestic policy. “We simply cannot in good faith support a process that could undermine the sovereign right of the United States to enforce our immigration laws and secure our borders,” he said.

Trump, who despises the UN, has made curbing immigration and building a wall on the US-Mexico border a key election pledge and has focused his recent ire on demonising a migrant caravan from Central America.

But the leaders of Germany, Spain, Greece and Portugal are set to attend the conference. Ireland, which supports the compact, will be represented by Minister for Justice Charlie Flanagan.

Central to objections is the claim that, although not legally binding, the compact will somehow acquire legal force. They argue it is “soft law” that might one day be used to press governments into hard commitments, such as acknowledging a “human right” to migration or expanding the grounds for asylum.

Far more important to the objectors, however, is the overall tone of the compact, which paints migration and migrants as positive, a notion anathema to populism and its leaders from Trump to Viktor Orban. At the core of the UN’s vision is the view that migration was integral to human experience throughout history, a source of “prosperity, innovation and sustainable development in our globalised world”.

The non-binding compact sets out a “co-operative framework” for dealing with international migration. Signatories agree, for example, to limit the pressure on countries with many migrants and to promote the self-reliance of newcomers. The text includes commitments to cementing the human rights of migrants, combating xenophobia, racism and discrimination, and developing capacities for communities to host newcomers.

It requires signatory states to pledge to “use migration detention only as a measure of last resort and work towards alternatives”, to “enhance consular protection, assistance and co-operation throughout the migration cycle”, and to “provide access to basic services for migrants”.

Countries should balance, the compact says, minimising adverse factors that drive people out of their countries with facilitating flexible pathways for regular migration.

Supporters of the compact such as German chancellor Angela Merkel face the difficult challenge of reconciling some overegged claims that the compact can be an important tool for managing migration, with denying that it has legal force. But creating a cultural shift on the issue by changing the nature of international discourse is in itself a positive development, advocates say.

“We are witnessing from some political sectors the manipulation, the distortion of the objectives of the pact,” says Antonio Vitorino, head of the International Organisation for Migration.

“Certainly there are challenges, irregular immigration is a threat, but we must react to the negative narrative by mobilising politically.”