Armoured vehicles to be deployed in Paris for ‘yellow vest’ protests 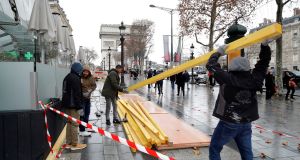 Workers protect a shop window with wood panels on the Champs-Élysées on Friday ahead of the eve of a protest by the gilets jaunes (yellow vests) movement. Photograph: Philippe Wojazer/Reuters

French security forces will deploy armoured vehicles in Paris on Saturday in anticipation of more violence and rioting by radical groups on the fringes of the gilets jaunes (yellow vests) movement.

A government official said 89,000 police and gendarmes would be mobilised across the country, 8,000 of them in the French capital, alongside a dozen VBRG armoured vehicles.

“We are facing people who are not there to demonstrate, but are there to smash things up and we want to make sure we’re not leaving them to do what they want,” prime minister Édouard Philippe said in an attempt to justify the use of the VBRG, which are capable of firing tear-gas grenades and clearing barricades and are rarely used in city areas.

Paris went into lockdown on Friday, as the city prepared for a fourth weekend of protests. There was a sense of impending attack in the city centre as banks, shops, restaurants and businesses rushed to board up their premises to protect windows from looters.

At Place de la Bastille, which is currently undergoing pedestrianisation, workers cleared away metal and concrete barriers and carried off anything that could be thrown. The windows of the Banque de France were being hurriedly boarded up on Friday morning. Staff at the Bastille Opéra were reported to have locked the orchestra’s instruments somewhere safe fearing an assault on the building.

Parisiens, even those far from the Champs-Élysées, Arc de Triomphe and Place de la Concorde – the scenes of violent clashes in previous weeks – were advised not to leave dustbins on the streets for fear they could be set alight.

The Eiffel Tower and Louvre museum will remain closed on Saturday. In Bordeaux, a dozen public buildings will be closed. Six League 1 football matches have been cancelled.

The gilet jaunes movement started as a protest against a proposed rise in diesel and petrol tax, and takes its name from the yellow high-vis jackets that all motorists must by law carry in their cars. It quickly expanded into a wider anti-government movement made up of moderate factions calling for higher living standards, who have protested peacefully, and a violent fringe.

The protesters’ anger is directed at a president, Emmanuel Macron, accused of being aloof and out of touch and a government seen to represent a political elite that has no idea how la France d’en bas – the less well-off – live.

Outside of the capital, tax offices have been boarded up, though the association of rural mayors has asked local councillors to keep town halls open to allow “each citizen to verbally express their anger”.

Ministers have repeated calls for calm and requested that protesters stay away from the capital as have union leaders, opposition parties and Roman Catholic clergy.

Hours before protesters were due to descend on the French capital, French media reported that Mr Macron had refused a demand to meet “moderate” gilets jaunes at the Elysée.

Benjamin Cauchy, an unofficial spokesman, said representatives of the movement had asked to see the president because “insurrection is at the gates of France and we don’t want any deaths this weekend”. The Elysée responded that the prime minister’s door “remained open”.

Mr Macron has been silent since Wednesday evening when he performed a surprising volte-face on the fuel tax, announcing it was being cancelled, just hours after Mr Philippe had told the National Assembly it was being frozen and “might” be abandoned.

French media quoted officials saying the president was anxious not to inflame the situation by addressing the country before Saturday’s demonstrations. He is expected to give a televised address at the beginning of next week.

Efforts to prepare for what gilets jaunes demonstrators are calling Act IV of their action is hampered by the grassroots movement having no formal organisation or leadership, posing an unique challenge to the French authorities.

Speaking to gilets jaunes protesters, a recurring theme is the feeling their leaders hold them in contempt. Attempts by the Elysée and government to calm the volatile crisis, including dropping the fuel tax, and pledges to review the complex tax system, have done little to appease protesters.

The insurrection is being further fuelled on social media websites by conspiracy theories and fake news, including widely spread but false claims that Mr Macron is “selling France” to the United Nations, World Bank or other international organisations planning to let millions of migrants take over France. The reports have been viewed several million times.

The French government has also deployed police to deal with high school student protests. A video showing police forcing students to kneel in rows with their arms behind their backs has caused shock and further criticism of the government.

Education minister Jean-Michel Blanquer said the images had to be seen in the context of police responding to student violence. “There are shocking images because we are in a climate of exceptional violence,” Mr Blanquer said. – Guardian