Brexit: MPs hear of laughter in Tipperary and Galway 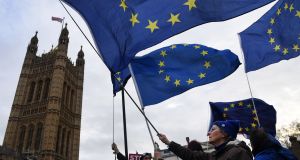 Pro-EU supporters call for a People’s Vote outside the British Houses of Parliament on December 6th, 2018: Some claim the backstop creates a problem of democratic control upwards because people in Northern Ireland would be subject to EU rules without any democratic representation in the EU. Photograph: Andy Rain

Although most of this week’s political drama has taken place in the House of Commons, they have also been debating Theresa May’s Brexit deal at the other end of the Palace of Westminster in the House of Lords.

On Thursday, former first minister David Trimble complained that the Northern Ireland protocol had been drawn up by members of the French administrative elite of énarques, who were “deeply imbued with a different way of approaching things”.

“That protocol is not a democratic one and it undermines the Belfast Agreement. Over the past year or two, people have expressed concern that this process might damage it. Yes, but it is not the desire to leave the EU that is causing the damage; it is what the EU is doing by way of reprisal, aimed not just at us in Northern Ireland but at the UK as a whole,” he said.

Historian Paul Bew offered a more thoughtful analysis on Wednesday when he acknowledged the need to address the difficulties Brexit created in Ireland.

This is a huge difficulty that will have to be attended to; otherwise, we lose the template of the Good Friday agreement

But he argued that Britain’s cast-iron assurance that it would not create a hard border meant that its efforts in the negotiations were aimed at ensuring that the EU did not oblige Ireland to do so.

“Maybe we were right to do it, but we should be absolutely clear that that is what we have been doing. We have put ourselves through a lot of pain to do it, and I absolutely accept it is right to be sensitive to the needs and problems created for Ireland by Brexit,” he said.

He said the backstop created a problem of democratic control upwards because people in Northern Ireland would be subject to EU rules without any democratic representation in the EU. This was, he said, inconsistent with the model of North-South co-operation in the Belfast Agreement.

“The Good Friday [Belfast] Agreement is profoundly based on a bottom-up approach to North/South regulatory arrangements, not a top-down approach. The backstop is a top-down imposition on how Northern Ireland matters will be handled in future. There is a huge gap between the Good Friday Agreement and the backstop; there is no avoiding it,” he said.

“This is a huge difficulty that will have to be attended to; otherwise, we lose the template of the Good Friday agreement, which all parties in Northern Ireland accept. Even now, when we cannot make it work, everybody accepts that that is the basic template for a settlement. If we throw it away, which will be the effect of going along these lines, we will be taking a massive risk with the stability of Northern Ireland.”

Ulster Unionist peer Reg Empey pointed to the huge preponderance of Irish trade that goes across the Irish Sea rather than across the Border, suggesting that Ireland’s real border with the UK was east/west rather than north/south.

But in the House of Commons on Thursday, Labour’s Chris Ruane, who represents the Vale of Clwyd, reminded MPs that any disruption to trade across the Irish Sea would hurt parts of Wales almost as much as Ireland.

“We have heard about the 17-mile tailbacks that would affect Dover. Seven-mile tailbacks are predicted for Holyhead. We are already seeing sea lanes open from Cork to Santander and from Cork to Rotterdam. If we lose the sea lanes and lose that trade with Ireland, which is as big as the trade with Brazil, Russia and India combined – it is worth over £45 billion – that will be a problem,” he said.

The SNP’s Angus Brendan MacNeil noted that Thursday was the 96th anniversary of the United Kingdom of Great Britain and Northern Ireland, adding that Brexit had shown the Irish they were right to become independent. Casual Irish schadenfreude and aggressive bluster about Brexit has bruised some feelings at Westminster but MacNeil relished it.

“The escaped Irish have belly laughs, and their biggest wind-up is to go on television at various points of crisis and tell the UK to stay calm. Back in Tipperary, Waterford and Galway they are laughing, because they know exactly what it means to tell London to stay calm,” he said.

Earlier, MPs rubbed their eyes as they watched Labour’s shadow chancellor John McDonnell, who once praised “the bombs and bullets and sacrifice” of the IRA, denounce the backstop as a threat to the union. Almost as improbably, Ian Paisley quoted C Desmond Greaves, the Marxist historian who acted as a muse to IRA chief of staff Cathal Goulding in the 1960s.

“All fundamental battles in British politics take place in the Conservative Party, with everyone else having bit parts,” Greaves said.