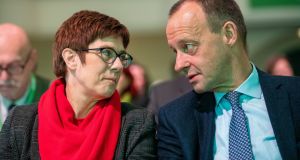 After 18 years she will hand over the reins – but a close race means neither she nor the 1,001 voting delegates are sure to whom.

There are two leading candidates in the succession stakes, promising continuity and change in varying degrees.

One is Annegret Kramp-Karrenbauer (56), a centrist whom Dr Merkel appointed as CDU secretary general and heir apparent last February. She faces tight competition from Friedrich Merz (63), a conservative-liberal who is returning to politics nursing a grudge against Merkel, who edged him off the party front bench in 2002.

Infuriated Merkel loyalists hit back on Thursday. “As Wolfgang Schäuble has broken the dam, I can say I’m convinced we have with Annegret Kramp-Karrenbauer the best chances of uniting the CDU and winning elections,” said Peter Altmaier, federal economics minister and former Merkel chief-of-staff.

Other Merkel loyalists went public to criticise what they called Mr Merz’s divisive, mercurial leadership style – and million-euro salary as German head of a US investment fund.

A dozen candidates competing for the leadership will address delegates at the CDU conference, but analysts say the crucial speech will be the valedictory address of Angela Merkel.

After almost two decades as leader, she hopes her 13-year run as chancellor – marked by the euro and refugee crises – can continue until 2021. But just how long she can stay on, and how diminished a political figure she leaves Hamburg, depends on her successor.

Ms Kramp-Karrenbauer is more interested in a successful co-habitation, although she has promised as leader to end the “leaden” Merkel era with greater grass-roots involvement and faster decision-making on big issues such as diesel bans and broadband roll-out.

On television she made a last-minute play for supporters of likely third-placed candidate Jens Spahn, suggesting the 38-year-old health minister could succeed her as CDU secretary general. “For me it is all or nothing,” she said, confident she has support of more liberal, northern delegates – and those of her native Saarland in the southwest.

Mr Merz, favoured by the party’s business wing and Germany’s conservative west and south, has promised to boost the party by halving the double-digit support of the far-right Alternative für Deutchland (AfD).

In a final pitch, via the Bild tabloid on Thursday, he promised tax cuts for Germany’s “hard workers”. “I want that the CDU do politics for them,” he said.

The priorities for delegates gathered in Hamburg: which candidate can unite the party’s warring wings, renew its decade-old programme and win the next election to retain the CDU’s hold on power since 2005?

Hamburg was abuzz with speculation over who was ahead and whether Dr Schäuble’s backing of Mr Merz had helped or hurt his leadership chances. Some see Dr Schäuble’s influence as key to a surprise Merz win; others say his attempt to influence the election in favour of a close personal friend could be seen as arrogance.

“The regional conferences made clear that many party members favour a radical change, and see Merz as a kind of Trump figure, just more polite,” said Dr Gero Neugebauer, a political scientist at Berlin Free University. “But many CDU MPs and middle-level functionaries and voting delegates are looking out for their own position and will favour continuity and AKK.”

The regional conferences were more personality than policy driven, with Germany’s European or global role barely figuring. Leading analysts see Ms Kramp-Karrenbauer at EU level as a continuity candidate in the Merkel mould. “But she is quicker is sensing and reacting to what people think and what’s important to them,” said Almut Möller of the European Council on Foreign Relations (ECFR).

“Most people looking in from outside are surprised at how undifferentiated the European debate in Germany is, and the leadership race did nothing to change this,” she said.

With 1,000 registered guests and 1,800 accredited journalists, the Hamburg gathering of Germany’s most powerful party promises its biggest decision in two decades.