US president Donald Trump has nominated William Barr to become the next attorney general in place of Jeff Sessions. Video: CSPAN 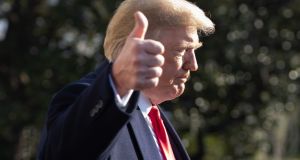 US president Donald Trump nominated William Barr to become the next attorney general in place of Jeff Sessions, one of a series of personnel changes announced on Friday. He has also selected state department spokeswoman and former Fox News presenter Heather Nauert to replace Nikki Haley as UN ambassador.

The announcements were made by Mr Trump as he left Washington for Kansas City amid rumours that John Kelly is preparing to step down as White House chief of staff. CNN reported that Mr Kelly had been interviewed by special counsel Robert Mueller as part of his investigation into Russian interference in the 2016 election and possible collusion or obstruction of justice by Mr Trump.

Ms Nauert (48) joined the state department last year without any foreign policy experience, though she had a long career in media. She has worked for news network ABC as well as Fox News which she joined in 1996. Before her appointment by the Trump administration she was a co-host on breakfast TV show Fox and Friends, one of President Trump’s favourite shows.

Ms Haley announced in October she would be stepping down as UN ambassador by the end of the year, a surprise move by the former South Carolina governor. She is widely perceived as having performed well in the job, though her bid to secure a UN resolution condemning Hamas failed on Thursday at the UN in New York.

Mr Trump described Ms Nauert as “very talented, very smart, very quick and I think she will be respected by all”.

Mike Pompeo is doing a great job, I am very proud of him. His predecessor, Rex Tillerson, didn’t have the mental capacity needed. He was dumb as a rock and I couldn’t get rid of him fast enough. He was lazy as hell. Now it is a whole new ballgame, great spirit at State!

But in a sign that the incoming UN ambassador may not have the same status as Ms Haley, a White House official said the position may be downgraded and no longer be a cabinet-level post. Mr Trump and secretary of state Mike Pompeo have been frequent critics of the United Nations and other multilateral organisations, criticising in particular what they claim is an anti-Israel bias within the United Nations.

Ms Nauert and Mr Barr will have to be confirmed by the US Senate.

The post of attorney general has been vacant since Mr Trump fired Jeff Sessions the day after the mid-term elections. Mr Sessions’ chief of staff, Matthew Whitaker, has been acting attorney general.

Mr Barr is well known in Republican circles. This will be the second time he will serve as attorney general – he was the nation’s top justice official under George HW Bush between 1991 and 1993.

Though his appointment is likely to be welcomed by Republicans, Barr has previously raised questions about the Mueller investigation. The 68 year-old lawyer, who worked alongside Mr Mueller at the Department of Justice when he was first attorney general, has publicly defended Mr Trump’s right to fire James Comey, citing the former FBI director’s handling of the Hillary Clinton email scandal.

Mr Trump also hit out at his former secretary of State Rex Tillerson on Twitter after the former Exxon Mobil chief – who was fired earlier this year – suggested at a conference that Mr Trump had tried to act against the law while he served as the president’s top foreign policy official.

“Tillerson, didn’t have the mental capacity needed,” said Mr Trump of his former secretary of state. “He was dumb as a rock and I couldn’t get rid of him fast enough. He was lazy as hell.”