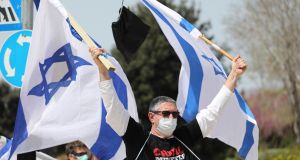 Israeli activists protest in front of the Knesset in Jerusalem, amid an ongoing row over the election of a new speaker. Photograph: Abir Sultan/EPA

Israel is facing an unprecedented constitutional showdown after the high court of justice ruled that Knesset speaker Yuli Edelstein must allow the parliament to elect a new speaker by Wednesday.

Supreme court president Esther Hayut ruled that Mr Edelstein’s ongoing refusal to allow a vote on a new speaker undermined the foundations of the democratic process and damaged the Knesset’s status as an independent authority and the process of the transition of power. She noted that this was one of the few exceptional instances in which the court’s intervention in the affairs of the legislature was necessary.r

But Mr Edelstein remained defiant, informing the court that he would not accept what he termed their “ultimatum”, plunging Israel into an extraordinary showdown between the two branches of power.

Israel has had three elections in the last year and the latest such vote, which took place earlier this month, was also indecisive, with neither the bloc supporting prime minister Binyamin Netanyahu nor the parties opposed to him securing a clear majority.

Parties representing 61 seats in the 120-seat Knesset have recommended Benny Gantz, leader of the centrist Blue and White, to be prime minister, but he will find it very difficult to muster a working majority.

The coronavirus crisis has created pressure for an emergency coalition and talks have taken place on a government based on Mr Netanyahu and Mr Gantz alternating as prime minister.

Against that backdrop this bitter dispute has emerged over who will be Knesset speaker, effectively controlling the parliamentary agenda.

The 61 Knesset members representing the anti-Netanyahu bloc demanded a vote for a new speaker. Mr Edelstein, from Mr Netanyahu’s Likud, refused to grant this, arguing that it would be better to wait until a new government is formed.

Blue and White and NGOs subsequently petitioned the high court of justice, which ruled that a vote must take place by Wednesday.

Likud officials called on Mr Edelstein to defy the court’s ruling, accusing the judiciary of encroaching on the sovereignty of the Knesset and violating the separation of powers. Likud minister Yariv Levin accused the court of leading Israel to anarchy and of acting as if it owned the country, arguing that just as the Knesset cannot force the supreme court to hold a certain hearing on a specific date, the opposite cannot happen either.

Retired justice Dorit Beinisch, a former president of the supreme court, warned that if the speaker refuses to comply with the ruling and does not hold a vote to elect a speaker, this would result in complete chaos and would break the basic frameworks of Israeli democracy.

Mr Gantz said coalition talks would not resume until a new speaker was elected. “Likud members – have you gone crazy? Have you gone off the rails?” he said. “When it’s good for you, you petition the court, and now you are calling not to uphold high court of justice rulings. This will never happen.”

The right wing in Israel traditionally views the judiciary as a bastion of left-wing elitism that rules in favour of civil rights and against settlers and the religious.