EU ministers back membership talks for North Macedonia and Albania 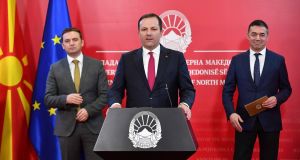 North Macedonia and Albania have been given approval by European ministers to start EU membership talks, in what Brussels called proof of its commitment to the Balkans amid claims from some in the region that it is doing too little to help them fight coronavirus.

“We reached a political decision to open accession negotiations with Albania and North Macedonia,” Andreja Metelko-Zgombic, European affairs minister for EU presidency holder Croatia, said on Tuesday after talks by video link with counterparts from across the bloc.

Leaders of member states are expected to confirm the decision when they hold discussions in the same format later this week, five months after France – with support from Denmark and the Netherlands – refused to give Skopje and Tirana the green light.

Senior EU officials called the Paris-led veto a “historic mistake” at a time when China, Russia and Turkey are seeking greater influence in the Balkans and courting populist and nationalist leaders who are quick to criticise Brussels.

The countries that dissented in October are satisfied with changes to the accession process that link it more closely to developments in candidate states, and a likely stipulation that Albania must speed up anti-graft, judicial and electoral reforms.

North Macedonia’s foreign affairs minister, Nikola Dimitrov, said his country’s “sense of endurance and resolve prevailed”. It had agreed to change its name last year as part of a hard-won deal to end a decades-long row with neighbouring Greece, a move that removed an obstacle to EU membership .

“The EU’s decision in this dire time is a symbol of its true strength,” Mr Dimitrov added.

The move will hearten advocates of EU enlargement at a time when criticism of the bloc’s strategy in the Balkans was being compounded by anger from some leaders in the region over its response to the spread of Covid-19.

“European solidarity does not exist. That was a fairytale . . . All my personal hopes are focused on and directed toward China,” Serbian president Aleksandar Vucic said last week when accusing the EU of failing to help his people, in complaints echoed by pro-Russian Bosnian Serb leader Milorad Dodik; Mr Vucic kissed China’s flag when welcoming its medics and supplies to Belgrade at the weekend.

No date has been set for Skopje and Tirana to start accession talks and the process will take many years, but EU enlargement commissioner Oliver Varhelyi said Tuesday’s decision “sends a loud and clear message to the western Balkans: your future is in the EU”.

“At the same time we work hard to support the western Balkans in coronavirus outbreak response. We mobilised €30 million for quick support for medical equipment and are considering measures to mitigate the negative economic impact of this crisis,” he added.

“With today’s political agreement we have put EU enlargement back on track and restored the credibility of the accession process.”