Britons allowed out to shop for basics, exercise, or travel to work where fully necessary 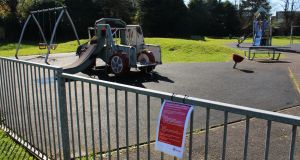 Britons who flout the British government’s instructions to stay at home face on-the-spot fines of £30 (€32.60) which could rise significantly if needed, prime minister Boris Johnson’s spokesman said on Tuesday.

On Monday, Mr Johnson said Britons would only be allowed out to shop for basic necessities, exercise, for a medical need, to provide care or to travel to work where absolutely necessary. Gatherings of more than two people in public who do not live together are banned.

“Regulations will be made as soon as possible and by Thursday at the latest to allow the police to issue fines to those who refuse to comply,” the spokesman said, adding police would “take whatever steps they consider appropriate to disperse groups of people who are flouting the rules”.

The spokesman said those ignoring the rules would initially be fined £30 but this amount would be kept under review and could be increased “significantly if it is necessary to ensure public compliance”.

Police officers will have powers to disperse gatherings under a ban on meetings of more than two people apart from those who live together.

On Tuesday, Mr Johnson’s official spokesman said: “The prime minister issued a clear instruction on behalf of the Government on the actions the public are required to take to help prevent the spread of the virus, protect the NHS and save lives.

“As with existing laws, the overwhelming majority of the public can be expected to follow the rules without any need for enforcement action. We would expect that compliance to begin immediately.”

The punishment would be a fixed penalty notice initially set at £30, but “we will keep this under review and can increase it significantly if it is necessary to ensure public compliance”.

Failure to pay a penalty notice could be subject to criminal proceedings and a conviction, he added.

Regulations will be set by Thursday at the latest to allow police to issue fines under the 1984 Public Health (Control of Diseases) Act for England and Wales.

The emergency legislation going through the House of Commons will provide equivalent powers to Scotland and Northern Ireland.

Asked how social distancing rules would be enforced by police, Martin Hewitt, chairman of the National Police Chiefs’ Council, told BBC Radio 4’s Today programme: “Ultimately, if people do refuse to abide by the rules then we will need to enforce them.” However, he said the legislation has not been enacted yet.

John Apter, national chairman of the Police Federation of England and Wales, had previously told the PA news agency he “cannot imagine” how officers would police social distancing, adding: “I just cannot rationally think how that would work.”– PA/Reuters

1 Tuberculosis vaccine ‘potential game-changer’ in Covid-19 fight
2 Coronavirus: Situation in Ireland ‘misrepresented’ because of limited testing
3 Coronavirus Q&A: How to shop safely during Covid-19
4 Coronavirus: Efforts to tackle nursing home outbreaks to be ramped up
5 We need to cancel the Leaving Cert and give students predicted grades
Real news has value SUBSCRIBE