Coronavirus: US set to ban large events for eight weeks 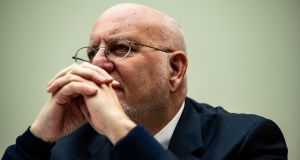 America’s Centre for Disease Control and Prevention (CDC) has recommended that large events and mass gatherings of more than 50 people should be cancelled or postponed for eight weeks, amid fears that coronavirus is spreading in the United States.

In updated guidance issued on Sunday evening, the national health institute cited conferences, festivals, parades, and weddings as examples of such gatherings.

Schools, higher education institutes and businesses are not included it said.

While the federal agency said the recommendation “is not intended to supersede the advice of local public health officials,” it said that the decision was made “in an attempt to reduce introduction of the virus into new communities and to slow the spread of infection in communities already affected by the virus.”

The new guidance comes as the White House prepares to provide an update this morning (Monday) on new measures to combat the virus. It follows the Trump administration’s decision to extend its travel ban to Ireland and Britain at the weekend.

Several states and cities across the United States have moved unilaterally to curb activities and services, amid growing alarm about the possible spread of the virus. While up to 3,400 cases have been reported, there are fears that the number of infected people could be much higher due to the lack of testing kits. Public schools in New York city will close later this week until April 20th. “This crisis will last months and it will get worse before it gets better. But it will get better,” said New York mayor Bill DeBlasio. Massachusetts – which has also shut schools and reduced public gatherings to 25 people – has banned all restaurant eating, and is only permitting delivery and takeaway. The governor of Illinois announced that all bars and restaurants in the state will close until March 30th. In total, more than a dozen states have announced school closures of some kind.

Some of the country’s most iconic cultural sites and sporting events have been cancelled, including the US Masters, the Boston Marathon and Broadway shows.

Nonetheless, US president Donald Trump played down the threat of the coronavirus on Sunday night, despite the Federal Reserve announcing a dramatic package of stimulus measures to help combat the economic impact of the virus.

“Relax. You’re doing great. It all will pass,” he said at a press conference on Sunday evening, as he noted that consumers were buying more goods than ever before.

The move by the Federal Reserve – announced on a Sunday evening ahead of markets opening on Monday – is an indication of the deep-seated concern about the impact of disruption from coronavirus on the US economy. US markets plunged last week, prompting the Fed to pump $1.5 trillion of loans into the short-term money markets on Thursday. Though indices recovered somewhat on Friday, losses have rocked Wall Street.

As well as cutting its benchmark interest rate to 0-0.25 per cent on Sunday, the Fed committed to purchasing $500 billion of treasuries and $200 billion of mortgage backed securities.

Mr Trump, who indicated that he had not been notified of the measures in advance, welcomed the move as he arrived in the White House press room for a press conference. “It makes me very happy – I want to congratulate the Federal Reserve,” he said. Mr Trump has long called on the Fed to reduce interest rates.

Earlier in the day he held a conference call with senior figures in the retail world, including the heads of Walmart, Whole Foods and Cargill. It comes as American shoppers rushed to supermarkets across the country to stock up on goods amid fears that the number of coronavirus cases is rising.

Speaking at the White House press conference last night, vice president Mike Pence said that more than 2900 cases of coronavirus had now been confirmed across 49 states.

“I want to assure you that the administration and the states … have no higher priority than the health and safety of the American public,” he said.

He said that, based on the latest scientific information, “for the American people as a whole the risk of serious illness remains low.”

He said that America has “the most efficient and effective supply chain in the world – and it’s working just fine,” as he called on Americans not to shop for more than they need on a weekly basis.

Earlier in the day, Anthony Fauci, head of the US national Institute of Allery and Infectious Diseases, warned that the United States “could get as bad as Italy” if proper measures were not taken.