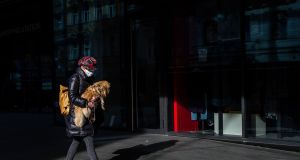 Prague, Czech Republic, on Monday. The Czech government has imposed further dramatic restrictions on the movement in efforts to contain the outbreak of coronavirus. Photograph: Gabriel Kuchta/Getty Images

The Czech Republic has sealed off a coronavirus “hotspot” as central Europe placed strict controls on travel, schools and mass gatherings, and Serbia denounced the EU’s response to the looming health crisis and sought help from China.

The Czech government banned all but emergency travel in and out of 21 towns and villages in the Olomouc region on Monday, after at least 25 of the area’s 24,000 residents tested positive for coronavirus; the country has 298 confirmed cases of the so-called Covid-19 virus, with no fatalities as yet.

Czech prime minister Andrej Babis said that until March 24th the country’s 10.7 million people should limit their movement to essential tasks such as going to work, buying supplies and helping relatives. Testing for coronavirus is expected to accelerate in the coming days with the delivery of a large batch of kits from China.

“Nobody is banning anyone from going for a walk,” said interior minister Jan Hamacek, “but having a beer with 20 people around you is irresponsible and dangerous.”

Czech schools, restaurants, pubs and most shops have already been shut down under a state of emergency, and similar measures are taking force across the region.

Hungarian prime minister Viktor Orban announced that his country was closing its borders to foreigners and ordering most shops and restaurants to close by 3pm.

“Life in the coming months will not be what it used to be...The entire economy will be in trouble,” said Mr Orban, adding that Hungary’s government and central bank were co-ordinating efforts because “apart from fiscal tools we will also need monetary tools to tackle the crisis”.

In neighbouring Romania, President Klaus Iohannis declared a one-month state of emergency to give the interim government – which went into self-isolation last week after a senator contracted Covid-19 – more powers to tackle the crisis.

“If necessary, the prices of medicines and medical equipment, essential goods...and heat, gas, water supply, sanitation and fuel can be capped,” he said.

Slovakia, the world’s biggest per capita carmaker, has its own concerns over the economic impact of coronavirus, after Volkswagen announced that it was preparing to suspend operations at its plant in the capital, Bratislava, due to the outbreak.

Serbian president Aleksandar Vucic, meanwhile, declared a state of emergency and complained of a lack of “solidarity” from the EU towards one of its candidate members: “I say to foreigners: don’t come to Serbia, except for the Chinese who are called upon to come, their doctors, the people who help us.”