Covid-19: South African lockdown will not curb spread for ‘at least two weeks’

Health minister warns public as number of cases rises to 554, increase of 102 in 24 hours 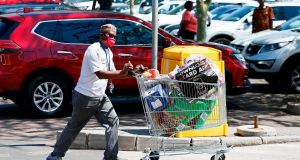 A customer wearing a mask against the spread of the COVID-19 coronavirus outside Makro in Pretoria East. Photograph: Phill Magakoe/AFP via Getty

South Africa’s health minister has said it will take time for the country’s looming lockdown to curb the spread of coronavirus, with infection numbers expected to rise for another fortnight at least.

The number of coronavirus cases in South Africa rose to 554 on Tuesday, an increase of 102 in 24 hours. Last Monday the number of cases stood at 62.

There have been no recorded deaths so far in South Africa, a country of 57 million people, from the virus that first emerged in China’s central Hubei province late last year and has spread to more than 160 countries so far.

Although most people infected with the disease in South Africa are located in Johannesburg, Cape Town and Durban, all nine provinces have recorded cases of coronavirus, also known as Covid-19.

“The theory and the thinking [is that] if we contain everyone with potential infections it should be possible to allow as many people as possible to shed the virus without any spreading,” Mr Mkhize said during a press conference.

Mr Ramaphosa’s unprecedented announcement on Monday, a week after he declared the outbreak a national emergency, has received widespread support from opposition parties, unions, businesses and professional associations.

South Africa’s fifth post-apartheid leader maintained in his address that imposing the tough movement restrictions was necessary to avoid a scenario in which hundreds of thousands of people are infected with Covid-19 in a few weeks’ time.

“This is extremely dangerous for a population like ours, with a large number of people with suppressed immunity because of HIV and TB [tuberculosis], and high levels of poverty and malnutrition,” said the president.

Between March 26th and April 16th people in South Africa are prohibited from leaving their homes unless for essential purposes, including shopping for food and medication, seeking medical treatment or picking up social grants.

Health workers, emergency personnel, security services and people involved in the production, distribution and supply of food and basic goods are among a group of citizens deemed exempt from the restrictions.

Shops and businesses will also be closed, except for pharmacies, laboratories, banks, essential financial and payment services, supermarkets, petrol stations and healthcare providers.

South Africa has not witnessed movement restrictions like this in the 26 years since apartheid ended, and even under the former white minority government restrictions were never imposed this harshly.

However, Mr Ramaphosa has been widely praised at home for his decisive approach. On Monday he conceded the measures he was introducing would have a lasting economic impact on the country.