Coronavirus: Italy has second-deadliest day with deaths up 743

American President Donald Trump has told reporters he hopes to reopen the U.S. economy soon. The US is now the third highest coronavirus infected nation in the world. Video: Reuters 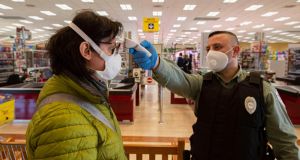 A customer has her temperature checked at the entrance of a supermarket in Milan, Italy, on Tuesday. Photograph: Marco Ottico/EPA

The coronavirus pandemic has infected more than 382,000 people worldwide, with at least 16,500 deaths.

Leaders from the Group of 20 major economies will convene a video conference on Thursday to discuss the coronavirus epidemic, multiple sources said, amid criticism that the group has been slow to respond to the global crisis.

G20 finance ministers and central bankers agreed during a separate video conference on Monday to develop an “action plan” to respond to the outbreak, which the International Monetary Fund expects will trigger a global recession. A subsequent statement from the Saudi G20 secretariat offered few details.

The extraordinary leaders’ summit will be complicated by an oil price war between two members, Saudi Arabia and Russia, and rising tensions between two others, the United States and China, over the origin of the virus, which has infected 378,000 people globally and killed more than 16,500.

Here are the latest updates from around the globe:

Italy has reported its second-deadliest day of the coronavirus outbreak, dashing hopes the death toll is declining in a country where hospitals are bursting at the seams and the government is struggling to bring the crisis under control.

Deaths on Tuesday rose again to 743, making a total toll of 6,820, after falling in each of the last two days, civil protection authorities said at their daily news conference in Rome. Confirmed cases of infection in the country now total 69,176. One piece of positive news in the latest data showed active cases rose the least in nearly a week – a possible early indication that the severe restriction of movement in the country is slowing the spread of the virus.

Prime minister Giuseppe Conte’s government may impose fines of up to €4,000 for violations of a nationwide lockdown as the country struggles to counter Europe’s worst coronavirus outbreak, Ansa news agency reported.

The Tuesday figures “show the country still isn’t able to report a real, generalized slowdown of the contagion”, Lorenzo Pregliasco, co-founder of researcher YouTrend, said in a phone interview.

The government has lifted the tight lockdown of Hubei province that was imposed to halt the spread of the new coronavirus.

People who are cleared to do so will be able to leave the province.

The city of Wuhan, where the outbreak started in late December, will remain locked down until April 8th. China barred people from leaving or entering Wuhan starting on January 23rd and expanded it to most of the province in succeeding days.

The number of confirmed coronavirus cases in Germany has risen by 4,764 within a day to reach to 27,436,the country confirmed on Tuesday.

Treasury secretary Steven Mnuchin and senate Democratic leader Chuck Schumer say they spoke by phone with president Donald Trump as they met late into the night at the Capitol. While the sides have resolved many issues in the sweeping package, some disagreements remain.

Washington has been straining to respond to the worsening outbreak, and tempers in congress have flared. Mr Trump is musing openly about letting a 15-day shutdown expire next Monday.

The prime minister Prayut Chan-o-cha says his government has agreed to declare a state of emergency to implement stricter measures to control the outbreak.

He said his Cabinet agreed at its weekly meeting to put a one-month state of emergency into effect on Thursday. This will give the government enforcement powers not normally available to it.

Authorities have cleared a demonstration site in New Delhi that has been continuously occupied by Muslim women since December in protest over a new citizenship law.

Shaheen Bagh was cleared early on Tuesday amid a citywide stay-at-home order.

Indian health officials say there are 446 active cases of Covid-19, and seven people have died from it. Thirty-six people have recovered.

More than 200 million of India’s 1.3 billion people have been on lockdown since Monday, including the metro areas of Delhi, Mumbai, Kolkata, Hyderabad, Bangalore and Chennai.

Prisoners regarded as vulnerable to the virus and low risk to society in Australia’s most populous state would be eligible for early parole under emergency legislation being introduced to the New South Wales Parliament.

It is unclear how many of the state’s 14,000 prisoners could walk free under the legislation proposed by New South Wales attorney general Mark Speakman.

The emergency legislation includes a raft of reforms that Mr Speakman said will provide public authorities with the powers they need to respond appropriately to this once-in-a-century crisis.

An education minister in Pakistan’s southern Sindh province says he has tested positive for coronavirus, although he did not visit any hospital where infected people are being treated.

Saeed Ghani urged people to follow the policy of social distancing to avoid the disease. He said he still had no symptoms of the infection and he has isolated himself at home.

Pakistan has imposed a lockdown to contain the spread of the new coronavirus.

The lockdown also has been extended to Pakistan’s part of disputed Himalayan region of Kashmir after a person was tested positive there. – PA and Reuters