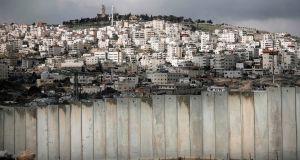 The Palestinian Authority (PA) and Israeli officials have both rejected the outlines of the American Middle East peace plan revealed in an Israeli television report.

The Palestinian leadership in Ramallah said that “any peace plan that does not include an independent Palestinian state – with all of East Jerusalem as its capital – on the 1967 borders, is destined to fail”.

The PA was responding to a report on Israel channel 13 News that claimed that US president Donald Trump’s “deal of the century” will include a Palestinian state on 85-90 per cent of the West Bank and some parts of East Jerusalem.

Nabil Abu Rudaineh, spokesman for president Mahmoud Abbas, said that the “rumours and leaks about the deal of the century, as well as ongoing attempts to find regional and international parties that would co-operate with this plan, are failed attempts that will reach a dead end”.

Any plan, he said, should be based on international resolutions and the principle of the two-state solution.

“We must accelerate the pace of construction in Samaria and Judea, first and foremost to ensure our natural right to our land and to prevent the catastrophe of the establishment of a Palestinian terror state,” he said, using the biblical name for the West Bank.

Israel’s newly-formed New Right party, which has two cabinet ministers, made clear it would not sit in a government that accepts a two-state solution.

A statement from the party said though Mr Trump was a “true friend of Israel”, the country’s “security and Israel’s wellbeing precede any other interest”.

New Right “will not sit in a government that will divide Jerusalem and establish a Palestinian state”, the party said, calling for support in the election in order to thwart the American initiative.

The US peace plan is expected to be unveiled after the Israeli election on April 9th.

The television report, based on a source who took part in a briefing in Washington on the plan by a senior American official, said it calls for Israel to annex large settlements and to evacuate smaller West Bank outposts deemed illegal under Israeli law.

Israel would retain sovereignty over the historic Old City and its immediate environs but the area would be administered together with the Palestinians, Jordanians and perhaps other countries.

The report failed to mention the fate of Palestinian refugees or what will happen to Gaza, which is controlled by the Islamist Hamas.

Mr Trump’s Middle East peace envoy Jason Greenblatt, described the report as “not accurate” , saying speculation at this juncture was “not helpful”.