British PM Theresa May says that she believes that the current Brexit agreement is the "best deal possible" as MPs prepare to vote on it. Video: Reuters 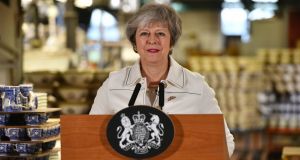 Britain’s prime minister Theresa May speaks at a factory in Stoke-on-Trent on Monday where she called on MP’s to support her Brexit bill in a vote on Tuesday. Photograph: AFP

The EU has promised British MPs that the use of a contentious backstop plan for Northern Ireland will be “as short as possible”, in an exchange of letters aimed at bolstering British prime minister Theresa May ahead of a historic House of Commons vote on her Brexit deal.

The three-page letter from Jean-Claude Juncker, the president of the European Commission, and Donald Tusk, European Council president, includes no significant revisions or additions to the terms of Britain’s Brexit package.

But the two leaders stress they expect any use of the Irish backstop - which many Brexiters say would “trap” the UK in a customs arrangement with the EU - would be “temporary” and replaced “as quickly as possible”.

While Mr Juncker and Mr Tusk’s assurances could help Mrs May remind MPs of the main elements of her deal, they fall short of UK requests to insert a new target date for both sides to make efforts to ensure that the backstop would only be used for a year, if it had to be triggered at all.

The letter came as Mrs May warned eurosceptic MPs that rejecting the package risked “paralysis” in parliament and “no Brexit”. Mrs May said she believed parliament blocking Brexit was now a more likely outcome than the UK leaving without a deal.

“It’s now my judgment that a more likely outcome is a paralysis in parliament that risks no Brexit,” she said on a visit to Stoke-on-Trent, a heavily Leave-voting Midlands city. “There are some in Westminster who would wish to delay or even stop Brexit and who will use every device available to them to do so.”

Mrs May hopes to keep the scale of the defeat to a margin of less than 100 in Tuesday evening’s vote, but some Conservative MPs predict Mrs May could lose by more than 200.

The pro-EU Commons indicated last week that it would block a no-deal Brexit. It voted to limit the government’s tax-raising powers in the event of no deal and passed an amendment requiring Mrs May to present a Plan B within three working days if her deal is defeated.

Very clear and strong letter from @JunckerEU and @eucopresident offering clarity, support and a positive commitment to work with UK in the interests of both EU and UK through #Brexit. https://t.co/e77JBrdXUs

May's letter to Juncker and Tusk

Response from Juncker and Tusk

Mr Juncker and Mr Tusk stressed in their letter that they were “not in a position to agree to anything that changes or is inconsistent with the withdrawal agreement” - the 585-page treaty outlining the terms of Britain’s departure, including the backstop plan to avoid a hard border on the island of Ireland.

Mr Juncker had supported giving more generous assurances on the backstop, which would seek to avoid a hard border in Ireland by keeping Britain in a customs union with the EU and tying Northern Ireland even more closely to EU rules.

But Mr Tusk and some member states argued for a more conservative approach that stuck closely to the language in the Brexit package.

The letter repeats previous assurances from the EU to work on concluding a UK-EU free trade deal, which Mr Juncker said “might” mean the backstop is either never triggered or replaced.

In a letter of her own to the EU institutions, Mrs May had noted some MPs’ fear that Brussels will not handle trade negotiations “energetically or ambitiously” or “down tools altogether and leave the UK permanently in the backstop arrangement”.

In response, Mr Juncker confirmed the commission saw the backstop as “a suboptimal trading relationship for both sides” that it “does not wish” to see enforced.

In a nod to the technological border solutions preferred by some Brexiters, the letter says that “facilitative arrangements and technologies will be considered” as alternatives to the backstop.

The withdrawal agreement already includes a clause that promises both sides’ “best endeavours” to agree a future relationship before the end of Britain’s transition period at the end of 2020.

Should this target be missed and the backstop come into force, Mr Juncker promises that the commission, which leads negotiations for the EU, will “redouble its efforts” with the aim “of concluding a subsequent agreement very rapidly”.

“The commission is committed to providing the necessary political impetus and resources to help achieving the objective of making this period as short as possible,” the commission president adds.

Mr Tusk, who represents the European Council of EU leaders, takes a more cautious approach on the pace and nature of future trade negotiations, repeating the conclusions of a December summit that called for the backstop to be only used for as long as “strictly necessary”.

He adds that the summit conclusions, while not legally binding, could have “legal value” to the extent that such agreements are supposed to set priorities for the union.

“They may commit the European Union in the most solemn manner,” Mr Tusk said. To the surprise of some EU diplomats, Mrs May had implied in December that summit conclusions had legal weight.

British officials now stress the potential importance of Mr Tusk accepting that the summit conclusions and the exchange of letters are “part of the context” in which the treaty “will be interpreted”.

A spokesman for Mr Juncker said the EU would not now “engage in interpreting the interpretation or clarifying the clarification” of the letter’s content ahead of the meaningful vote. - Copyright The Financial Times Limited 2019