Rescuers search for boy (2) who fell down well in Spain 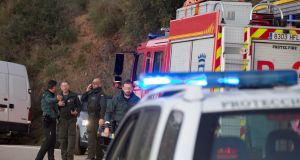 Spanish Civil Guard agents at the site where a two-year-old boy fell into a depe hole near the town of Totalan in Malaga, southeastern Spain. Photograph: Daniel Perez/EPA

More than 100 firefighters and emergency workers in southern Spain are searching for a two-year-old boy who fell into a well.

Rescuers believe the boy fell into the 100-metre deep waterhole in a mountainous area near the town of Totalan after he walked away from his parents.

Firefighters have found a bag of sweets that the boy was carrying when he went missing on Sunday afternoon, said Maria Gamez, Spain’s government representative in Malaga province.

The shaft, which is too narrow for an adult to enter, had been bored a month earlier during water prospection works and had not been covered or protected, local media reported.

Rescuers are trying to avoid blocking the small diameter of the well with falling soil as they search for the boy, Ms Gamez said.