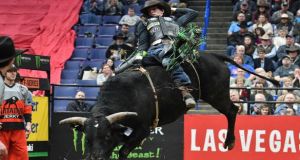 A professional bull rider has died as a result of injuries sustained in a competition in Denver.

Professional Bull Riders (PBR) confirmed in a statement that Mason Lowe died on Tuesday after he was thrown from a bull and trampled during Monday’s event at the Denver Coliseum at the National Western Complex.

Lowe (25) was immediately transported to Denver Health, where he succumbed on Tuesday to “massive heart, heart valve and aorta damage” according to USA Today.

“The loss of Mason is devastating to us all,” PBR chief executive officer Sean Gleason said. “Our thoughts, prayers, and deepest condolences are with his family and wife Abbey. Right now we’re focusing on easing their pain and supporting them during this very difficult time.”

All riders will wear a special patch to remember Lowe when the competition concludes on Tuesday night, the tour said.

Said Gleason: “Our priorities are to Mason’s family first as we support them following his tragic passing, and then to his brothers in arms in Denver who are preparing to soldier on, strap in and compete tonight.”

Lowe, a native of Exeter, Missouri, was ranked 18th in the world by PBR and had earned nearly $10,000 in prize money this year, his seventh as a professional.

1 Three relatives dead after apparent murder-suicide in Kanturk, Co Cork
2 Gardaí say 52 people who went missing in 2020 not yet found
3 Woman stranded in Ireland due to pandemic has ‘miracle baby’
4 Almost 20% of staff at Dublin hospital have antibody evidence of Covid-19 infection
5 Gardaí not seeking anyone else in relation to Cork shooting deaths
Real news has value SUBSCRIBE