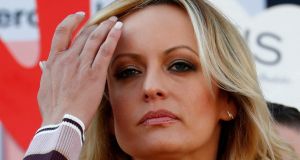 Stormy Daniels sued Mr Trump for defamation in March 2018, before her arrest, and was seeking release from a non-disclosure agreement she signed before the 2016 presidential election to remain silent about the affair she said she had with Mr Trump. Photograph: Reuters

The Columbus vice-unit officers who arrested Ms Daniels on July 12th, 2018, were registered Republicans as is the president, Ms Daniels, whose real name is Stephanie Clifford, said in her lawsuit filed in federal court in Ohio.

“Defendant officers believed that Ms Clifford was damaging President Trump and they thereafter entered into a conspiracy to arrest her during her performance in Columbus in retaliation for the public statements she had made regarding (Trump),” noted the suit.

The legal action against the officers could bring to light further details about the circumstances of Ms Daniels’ arrest, which made headlines at the time.

Columbus police had accused her of committing a misdemeanour sex offence while performing at the club Sirens by touching three customers who were undercover vice detectives.

The charge was dropped hours later. Ms Daniels had committed no crime because she did not perform regularly at the club, as required under the law, said a city attorney at the time.

The Columbus Division of Police launched an internal investigation soon after the incident.

“The Columbus Division of Police internal affairs bureau continues its investigation, therefore it would be inappropriate for us to comment on this matter at this time,” said the division about the lawsuit.

The division, in Ohio’s state capital, was not named as a defendant in Ms Daniels’ lawsuit, which accused the officers of violating her civil rights.

A representative for the police union for the officers could not immediately be reached for comment.

Ms Daniels sued Mr Trump for defamation in March 2018, before her arrest, and was seeking release from a non-disclosure agreement she signed before the 2016 presidential election to remain silent about the affair she said she had with Mr Trump.

Mr Trump has denied having an affair with Ms Daniels, saying she was paid to stop “false and extortionist accusations”.

Ms Daniels’ attorney, Michael Avenatti, has described her arrest as a politically motivated set-up since the day it happened.

“Here in America, unlike in Russia, we don’t arrest citizens for political purposes in order to silence them,” said Mr Avenatti on Monday. – Reuters