Concern over rights abuses in Bahrain 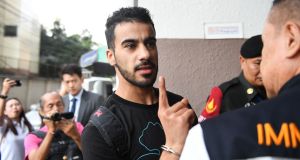 Hakeem al-Araibi, a former Bahrain national team footballer with refugee status in Australia, is escorted by immigration police to a court in Bangkok on December 11th, 2018. Photograph: Lillian Suwanrumpha/AFP

Dissident Bahraini footballer Hakeem al-Araibi, an Australian resident, remains in a Bangkok prison after being arrested on a Bahraini warrant last November when he arrived on holiday. By contrast, Saudi teenager Rahaf al-Qunun (18), held 48 hours by the Thais, has begun a new life in Canada.

Like Qunun, Araibi (26) fears discrimination and persecution in his homeland. After a Bahraini court sentenced him to a decade in jail in 2014 for vandalising a police station during Arab Spring protests – a charge which the former member of the country’s national team denied – he fled to Australia. He was granted asylum and plays for Melbourne football club Pascoe Vale.

Last month Araibi’s Thai detention was extended by 60 days. If he is deported to Bahrain, he said, “I will be forced to confess things that I have never done.”

He suffered beating during his earlier detention and, like Qunun, feared for his life. Human Rights Watch (HRW) reports he has been targeted because his imprisoned brother was a political activist demanding reform and civil rights for Sunni-ruled Bahrain’s Shia majority.

HRW says extradition is banned for recognised refugees who could be tortured in their home countries. Australia’s call for his “immediate return” has been joined by its football federation and football’s governing body Fifa.

Wadaei’s wife’s brother, Sayed Nazar, mother Hajar Mansour and cousin Mahmoud Mansour were jailed in 2017, tortured into false confessions and sentenced to three years in prison on a charge of planting a fake bomb. Wadaei, whose Bahraini citizenship has been revoked, is director of the Bahrain Institute for Rights and Democracy.

Bahrain has rejected this month’s UN call to free prominent activist Nabil Rajab (54), contending he has been incarcerated for posting “false tweets which do not fall within freedom of expression”. This statement was issued on the day when US secretary of state Mike Pompeo visited the island nation, which hosts the US Fifth Fleet’s naval base and is closely tied to US ally Saudi Arabia.

At the end of last month Bahrain’s supreme court upheld the sentence of five years imposed on Rajab, president of the Bahrain Centre for Human Rights, for tweeting criticism of Saudi Arabia’s war in Yemen and torture in Bahrain’s Jaw prison. HRW deputy regional director Lama Fakih said he “should not have been arrested in the first place, and upholding his sentence is a grave miscarriage of justice”.

Active since the 1990s and repeatedly detained, Rajab has campaigned for migrant workers’ rights in the Gulf countries as well as civil rights in Bahrain. He has been appointed to senior positions in international advocacy organisations, making him a high profile activist. He played a leading role in Bahrain’s 2011 democracy demonstrations which were countered by a crackdown backed by Saudi Arabia and the Emirates.

On February 14th, 2011, Bahrainis rose up against the US- and British-backed Khalifa dynasty, which had reigned since 1783. The protests, mounted by Sunnis as well as Shias, began at the Pearl Roundabout at the heart of the Bahraini capital and spread throughout the country. The authorities responded with water cannon, tear gas and live fire. Saudi Arabia deployed 1,000 troops, the Emirates 500 police.

At least 164 protesters were killed and thousands arrested. Shia mosques were destroyed and Shia protesters branded “terrorists”. Leading rights figures were arrested; at least five detainees died during torture, which is widespread. There are currently an estimated 4,000 political prisoners in Bahrain.