Macron’s ex-bodyguard in custody over use of diplomatic passports 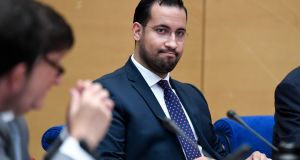 Alexandre Benalla, the former bodyguard and security adviser of French president Emmanuel Macron, has been placed in custody in relation to a probe into his use of diplomatic passports, said the Paris prosecutor’s office.

Mr Benalla, who was fired last year after a video emerged of him attacking a May Day protester, was back in the spotlight for consultancy work in African countries and his acknowledgment that he had continued to use diplomatic passports.

Paris prosecutors had opened a preliminary inquiry into Mr Benalla’s holding of the diplomatic passports even though the former bodyguard said he had handed them over when he was fired and got them back through the president’s staff in October. – Reuters