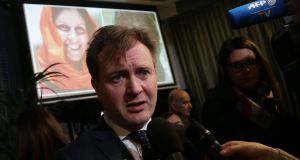 A British-Iranian aid worker who has been jailed in Tehran is going on hunger strike in protest at her treatment, her employer and her husband have said.

Nazanin Zaghari-Ratcliffe (40), a project manager with the Thomson Reuters Foundation, was arrested in April 2016 at a Tehran airport as she headed back to Britain with her daughter after a family visit.

She was sentenced to five years in jail after being convicted of plotting to overthrow Iran’s clerical establishment, a charge denied by her family and the foundation, a charity organisation that operates independently of Thomson Reuters and Reuters News.

“Nazanin called me this morning to confirm from Evin prison that she has started this hunger strike this morning. It is initially a three-day hunger strike,” her husband, Richard Ratcliffe, said at a press conference in London.

He said his wife was taking the action to press demands for access to specialist doctors to address health concerns and to be allowed such treatment as they prescribed.

He said she was also protesting over an attempt by Iranian Revolutionary Guard Corps interrogators to pressure her to turn informant for Iran in late December.

“What really pushed her over the edge was they tried to make her become a spy for Iran against the UK,” he said. “She was told it would be safer for her and safer for her family afterwards if she agreed to do this.

“She was told to think about it and that they would return. She has been terrified ever since.”

Britain has said it will not let Ms Zaghari-Ratcliffe’s case rest and foreign secretary Jeremy Hunt said he had summoned Iran’s ambassador on Monday to demand she be given immediate access to the healthcare she needed.

“Her ongoing detention is TOTALLY unacceptable and her treatment at the hands of Iranian authorities is a fundamental breach of human rights,” Mr Hunt wrote on Twitter.

“We all have Nazanin high in our thoughts as she starts her hunger strike today. It is a truly terrible indictment of Iran’s approach that she feels she needs to resort to such an ordeal. Iran must take action now.”

Iran has said that the trial and the verdict are in the hands of the judiciary.

Monique Villa, chief executive of the Thomson Reuters Foundation, said it was “extremely shocking to see our colleague ... going on hunger strike to protest at her inhumane treatment”.

Britain has advised British-Iranian dual nationals against all but essential travel to Iran, tightening its existing travel advice and warning it has only limited powers to support them if detained. – Reuters