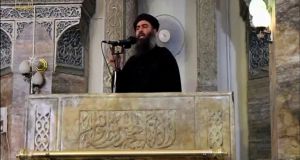 A man purported to be Isis leader Abu Bakr al-Baghdadi at a mosque in Mosul, according to a video recording posted on online on July 5th, 2014. Photograph: Reuters

US and Iraqi officials believe the leader of the so-called Islamic State (Isis), Abu Bakr al-Baghdadi, has left commanders behind with diehard followers to fight the battle of Mosul. They believe he is now hiding out in the desert, focusing mainly on his own survival.

It is impossible to confirm the whereabouts of the Isis “caliph”, who declared himself the ruler of all Muslims from Mosul’s Great Mosque after his forces swept through northern Iraq in 2014.

But US and Iraqi intelligence sources say an absence of official communication from the group’s leadership and the loss of territory in Mosul suggest he has abandoned the city, by far the largest population centre his group has held.

He has proved to be an elusive target, rarely using communication that can be monitored, and moving constantly, often multiple times in one 24-hour cycle, say sources.

From their efforts to track him, they believe he hides mostly among sympathetic civilians in familiar desert villages, rather than with fighters in their barracks in urban areas where combat has been under way, say sources.

At the height of its power two years ago, Isis ruled over millions of people in territory running from northern Syria through towns and villages along the Tigris and Euphrates river valleys to the outskirts of Baghdad in Iraq.

Intelligence sources point to a sharp drop in Isis postings on social media as evidence that Baghdadi and his circle have become increasingly isolated.

The Isis leader has not released a recorded speech since early November, two weeks after the start of the battle for Mosul, when he called on his followers to fight the “unbelievers” and “make their blood flow as rivers”.

The group’s presence on Telegram, a social media network that had become its main platform for announcements and speeches, has tapered off. The coalition estimates that Isis activity on Twitter has fallen by 45 per cent since 2014, with 360,000 of the group’s Twitter accounts suspended so far and new ones usually shut down within two days.

In what is likely to be a major symbolic victory for the US-backed Iraqi forces, they are now closing in on the area around Mosul’s Great Mosque on the western bank of the Tigris, where Baghdadi proclaimed his caliphate.

More than half of the 6,000 jihadists left to defend the city have been killed, according to Hisham al-Hashimi, author of the book World of Daesh, who also advises the Iraqi government. Daesh is an Arabic acronym for Islamic State.

US commanders sound upbeat and say the battle for the city is now in a late stage.

“The game is up,” said US Air Force Brig Gen Matthew Isler at the Qayyara West Airfield south of Mosul, adding that some of Isis’s foreign fighters are trying to leave the city.

Those left behind to fight, mostly Iraqis, are putting up a “very hard fight” on the tactical level but they are no longer an integrated force, as coalition air strikes took out command and control centres, car bombs and weapon caches, he said.

“They have lost this fight and what you’re seeing is a delaying action,” he said.

However, on Tuesday night Iraqi forces repulsed an overnight Isis counterattack near Mosul’s main government building hours after they recaptured it, a military official said on Wednesday and troops sought to push the militants further back.

Military officials had said that Rapid Response troops, an elite interior ministry division, on Tuesday recaptured the provincial government headquarters, the central bank branch and the museum where militants filmed themselves destroying priceless statues in 2015.

“The museum is completely empty of all artifacts. They were stolen, possibly smuggled,” said Maj Gen Lami.

He added that most of the fighters who had fought around the governorate building were local, but there were some foreigners.

“An order was issued for foreign fighters with families to withdraw with them. Those who do not have a family should stay and fight, whether foreign or local,” he said.

Isis fighters are retreating further into the west of the city, say military officials, but are putting up stiff resistance, hiding among the civilian population and deploying car bombs and snipers.

Losing Mosul would deal a fatal blow to al-Baghdadi. Iraq’s prime minister Haider al-Abadi said the country would continue hitting Isis targets in Syria, as well as in neighbouring countries if they give their approval.

In Syria, Isis it still holds Raqqa city as its main stronghold as well as most of Deir al-Zor province. But it is being confronted by by an array of separate enemies, including US-backed forces and the Russian-backed Syrian army.

The group has carried out bombings in Iraqi and Syrian cities as its caliphate has shrunk.

The last official report about Baghdadi was from the Iraqi military on February 13th. Iraqi F-16s carried out a strike on a house where he was thought to be meeting other commanders, in western Iraq, near the Syrian border, it said.

The US government has had a joint task force to track down Baghdadi which includes special operations forces, the CIA and other US intelligence agencies as well as spy satellites of the National Geospatial Intelligence Agency.

But Baghdadi seems to have learned the lessons from the 2011 capture and killing of Osama bin Ladin. He relies on multiple couriers and not just one, unlike the al-Qaeda founder, say US intelligence sources.

He also switches cars during trips, a lesson learned from the 2011 drone strike that killed Anwar al-Awlaki, an al-Qaeda figure in Yemen.

Baghdadi has not publicly appointed a successor, but Iyad al-Obaidi, also known as Fadel Haifa, a security officer under former dictator Saddam Hussein, is known to be the de facto deputy, according to Iraqi intelligence sources.

More than 40 leading members of the group have been killed in coalition air strikes, but the insurgency is likely to continue even if Mosul is captured and Baghdadi and his aides are killed, according to Iraqi security experts.

In battle flashpoints elsewhere Iraqi army units and Shia paramilitary forces took control of a road leading west out of Mosul towards the town of Tal Afar on, state television reported a military official as saying.

The army’s 9th Armoured Division and two Shia fighting forces took control of the Mosul-Kasik road, “isolating the right bank (western side of Mosul) from Tal Afar,” the state TV reported in a news flash.