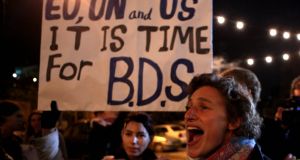 Israel’s parliament has passed a controversial law barring entry of foreigners who call for a boycott of Israel, including activists who limit their protests to West Bank settlements.

The Bill, which passed in the Knesset by 46 to 28 votes, stipulates that entry will be denied to foreigners who openly and publicly advocate boycotting Israel and to representatives of organisations that call to for such a boycott.

A state that boycotts the world basically isolates and boycotts itself

The law, backed by right-wing and centrist parties of prime minister Binyamin Netanyahu’s ruling coalition, is aimed at curbing the global BDS (Boycott, Divestment, Sanctions) movement, although opponents warned that it will only increase Israel’s isolation.

Under the law the interior minister will have the authority to grant exceptions.

Despite protests from opposition Knesset members and civil rights groups, the law failed to distinguish between activists who urge a general boycott of Israel and those who focus on West Bank settlements.

Dov Khenin, the sole Jewish Knesset member of the predominantly Arab Joint List, said that by failing to make such a distinction, the law would actually encourage boycott efforts.

“When the entire world promotes a boycott of the settlements, a law that denies entry to boycott supporters is basically a law to boycott the world,” he said. “A state that boycotts the world basically isolates and boycotts itself.”

Ksenia Svetlova of the opposition Zionist Union said she opposed the law even though she was against international boycott efforts. “We are all against BDS but a law that denies their members entry to Israel opens the door to the thought police. Let us first promote denying entry to the neo-Nazis and the anti-Semites that the right wing fawns on.”

Bezalel Smotrich of the right-wing Jewish Home, who sponsored the Bill, said it reflected the willingness of Israel to combat its enemies. “We are no longer turning the other cheek. Denying entry to BDS supporters who come here in order to undermine us from within is the necessary minimum action required of us to take against Israel’s haters.”

Roy Folkman, joint sponsor of the Bill, of the centrist coalition party Kulanu, denied opposition claims that the measure was an attempt to stifle legitimate political dissent. “We can feel national pride today and also believe in human rights,” he said. “We can defend the reputation and the honour of the state of Israel and that is nothing to be ashamed of.”

In December Israel refused entry to BDS supporter Isabel Piri from Malawi after she arrived at Ben Gurion International Airport as a tourist. Israel said she was turned back because she was active in the World Council of Churches, which advocates boycotting goods produced in West Bank settlements.