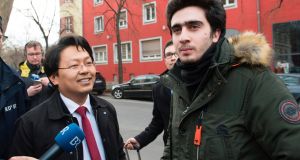 Facebook is not obliged to actively seek out and delete fake or slanderous posts on its social network in Germany, a regional court has ruled.

The ruling followed a complaint by a Syrian asylum-seeker in Germany who was pictured taking a selfie with German chancellor Angela Merkel.

The images were later used in posts linking him – falsely – to terrorist attacks in Brussels and Berlin.

In an important victory for Facebook in its European battle over “fake news”, a Bavarian regional court ruled that the network was not obliged to proactively delete every misuse of the Merkel selfie, as demanded by the asylum-seeker, Anas Modamani.

Würzburg regional court ruled that Facebook was not responsible for the information’s veracity simply by enabling the distribution of the information.

The court said that wider legal questions – such as whether the network could be obliged to be more proactive in such cases – overstepped the scope of the current case.

Mr Modamani’s lawyer, Mr Chan-jo Jun, announced an appeal to the ruling, saying his client had received anonymous threats to drop the case against Facebook.

Mr Jun said the case had shown the urgent need for “antique” defamation legislation to be updated to cover new social media platforms.

“It cannot be that opinion is shaped on the internet by Facebook standards and not the constitution,” he said.

In one post about asylum-seekers setting fire to a homeless man in Berlin, unknown Facebook users took the pictures of Mr Modamani with Ms Merkel for a photo montage under the headline: “Merkel took a selfie with the perpetrator.”

The photo montage was shared more than 500 times.

Mr Modamani said that, when he complained, Facebook insisted the posts did not breach its community standards, though access to some was later blocked in Germany.

Facebook welcomed Tuesday’s ruling and said it would continue to operate in Germany using its “notice and take down” approach to problematic posts.

Germany’s federal government has vowed to introduce new laws obliging Facebook to act on problematic posts within 24 hours or face fines of up to €100,000.

A German internet study also claimed on Tuesday that the average time it takes for Facebook to take down problematic posts in Germany is eight days.