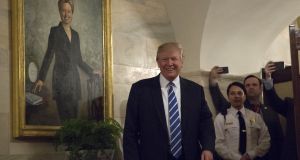 President Donald Trump walks in a corridor of the White House on Tuesday to greet visitors, while a portrait of Hillary Clinton hangs on the wall. Photograph: Aude Guerrucci/Getty Images

The United Nations has criticised US president Donald Trump’s revised executive order temporarily halting immigration from six Muslim-majority countries, arguing that it will worsen the plight of refugees.

Responding to Monday’s issuance by Mr Trump of a fresh order halting immigration from six Middle Eastern and African countries for 90 days, and suspending the US refugee policy for 120 days, the UN high commissioner for refugees Filippo Grandi said that “humane leadership” was needed more than ever before.

“Americans have long played a crucial role in promoting global stability while simultaneously exemplifying the highest humanitarian ideals,” he said, noting that refugees were people forced to flee war, violence and persecution.

With the order scheduled to come into effect next Thursday, New York’s attorney general Eric T Schneideman, who was a plaintiff in the suit seeking to block the first order, said his office was reviewing the ban and stood ready to “litigate again” if necessary.

Washington state attorney general Bob Ferguson, whose original case against the order led to its suspension, described the second ban as a “very significant victory for the people of the state of Washington” noting that the fact that it took the Trump administration a month to complete a revised executive order “speaks volumes about the constitutionality of that original executive order”.

The allegation may be included in the terms of reference for investigations by the House and Senate Intelligence committees into Russian interference in last year’s US presidential election.

In the final weeks of Mr Obama’s presidency, the FBI and CIA announced that they had concluded that the Kremlin had tried to manipulate the outcome of the election.

The issue of Russian interference in the US electoral process surfaced during Monday’s senate hearing into the nomination of Rod Rosenstein as deputy attorney general.

Mr Rosenstein’s appointment has taken on new significance following attorney general Jeff Sessions’s decision to recuse himself from any current and future investigations into Russia’s role in the US electoral process following revelations last week that he had failed to disclose two meetings with the Russian ambassador to the United States during his own confirmation hearing. Oversight for any investigations into Russia’s role in the election will now fall to Mr Rosenstein, as second-in-command at the Department of Justice, if appointed.

Asked by senators on Monday if he had made any decision on whether to appoint a special counsel to investigate Russia’s attempt to influence the election, Mr Rosenstein said he was “not in a position to answer” as he had not yet read the intelligence reports, but he told senators: “On the issue of foreign interference in American elections I can assure you that you and I are on the same side.”

Meanwhile, House Republicans came forward with a new plan to repeal and replace the Affordable Care Act, also known as Obamacare, late on Monday, which includes a controversial plan for tax credits, despite signs of divisions among Republicans in the House and Senate.

Welcoming the publication of the new plan, Health and Human Services Secretary Tom Price said that the goal was to allow Americans to choose their own doctor and reduce costs for families.

Noting that premiums had increased by 25 per cent on average across the United States since the introduction of Mr Obama’s signature Affordable Care Act, he said that insurers were leaving the market and patients were not getting the care they need.

“We want a system that is affordable . . . a system that empowers patients,” he said during a press conference at the White House.