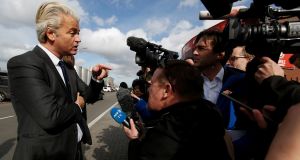 in The Hague With the Dutch general election campaign in its final week, far-right leader Geert Wilders has accused premier Mark Rutte of being too “weak” to ban the Turkish foreign minister from addressing a rally of ethnic Turks supporting wide new powers for Turkey’s president, Recep Tayyip Erdogan.

Mevlüt Cavusoglu is due to address the rally in Rotterdam on Saturday calling for a yes vote in a Turkish referendum in April that would amend the constitution and allow Mr Erdogan to control budgets and appoint judges – as well as to remain as head of state potentially until 2029.

Diplomatic relations between Berlin and Ankara deteriorated sharply at the weekend when Mr Erdogan hit out at what he called “Nazi practices” in Germany where three rallies due to support him were cancelled.

In the Netherlands, Mr Rutte described Saturday’s planned rally as “undesirable” and said the government was “looking at all legal avenues” to prevent the visit by Mr Cavusoglu. However, he stopped short of saying it would take unilateral action to stop the meeting going ahead.

“The Dutch public space is not a place for playing out the political campaigns of other countries,” he said, warning that in his view the proposed changes to the Turkish constitution would take Turkey, an aspirant member of the EU, in “a less-democratic direction”.

Although the Turkish community typically votes for parties of the left such as Labour and D66 rather than for Mr Rutte’s Liberals, the prime minister knows that with the margin between himself and Mr Wilders in the polls too tight to call, he can ill afford to alienate any potential voters.

Mr Wilders has no such concerns. He was convicted last December of inciting discrimination against the Netherlands’s Moroccan population – and had no compunction about alienating the Turks as well when he rounded on Mr Rutte for not banning the Rotterdam rally.

After holding a protest outside the Turkish embassy in The Hague on Monday evening, he said that allowing Mr Cavusoglu to visit the Netherlands “would only strengthen the Islamofascist leader, Erdogan – and for us, that is about the worst thing that could happen”.

If it were up to him, he declared, he would ban “the entire Turkish cabinet” from visiting the country for the next two months – until the referendum was over. Unfortunately, he added, Mr Rutte had been too “weak” to take such decisive action.

As the row deepened, the mayor of Rotterdam, Ahmed Aboutaleb – the first Muslim mayor of a major European city – said he had no power to prevent the rally as things stood.

Mr Cavusoglu was quoted by the Anadolu news agency in Ankara on Tuesday as saying the visit would go ahead. “We go where we must to meet our own citizens, including the Netherlands,” he said. “Where is the democracy and freedom of association you always want to teach us so much about?”

German finance minister Wolfgang Schäuble has attacked as “irresponsible” Turkish claims about the use of “Nazi practices” to prevent political rallies on German soil.

Dr Schäuble warned that the upcoming constitutional referendum, if accepted by voters next month, would take Turkey in the “wrong direction” and away from values it shared with Europe, of human rights and the rule of law.

“We have no interest in an escalation but we cannot accept that Germany is talked about in this way,” he said of the comments made by Mr Erdogan.

With an eye on Germany’s three million strong Turkish-German community, Dr Schäuble said talk of “Nazi” methods was “irresponsible for the peaceful co-existence of people living in Germany but also for co-operation with Turkey”.