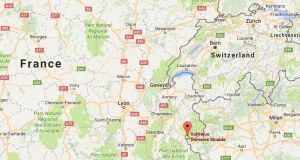 An avalanche in the French skiing resort of Valfrejus has resulted in the death of one tourist and two others remain missing, local police said on Wednesday.

The police said they were continuing to search for the two missing skiers, after having found the victim’s body overnight.

The deceased and two missing tourists are Dutch nationals.

The avalanche occurred after a similar incident at the resort of Tignes on Tuesday, where emergency staff managed to rescue skiers caught up by the sudden downrush of snow.