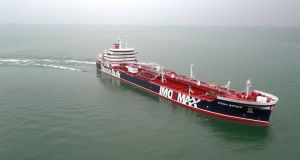 Iran has seized a UK flagged tanker in the Strait of Hormuz in a sharp escalation of the crisis between the Islamic republic and the west.

Amid reports that a second tanker had also been apprehended, Iran’s Revolutionary Guard said the Stena Impero was “seized by Zone 1 of the guards’ naval forces” as it moved through the Strait of Hormuz. The elite force added that the tanker “failed to observe the international maritime rules and regulations”.

The vessel’s owner, Stena Bulk, said the tanker was approached by “unidentified small crafts and a helicopter” as it was in the Strait of Hormuz en route to Saudi Arabia. The Swedish company said it was unable to contact the ship, which has a crew of 23.

The seizure comes just 24 hours after the US claimed to have shot down an Iranian drone that it said ventured too close to an American warship in the strait. Tehran has denied it lost a drone, but it is a sign of how the tanker disputes may be escalating into military conflict.

A second tanker, the British-operated Mesdar, also made a sharp change of direction in the Gulf around the same time.

The Mesdar tanker was allowed to continue its course after being warned over safety and environmental issues, according to reports from Iran’s semi-official Tasnim news agency reported, quoting regional military sources.

Britain’s foreign secretary Jeremy Hunt said a second vessel had been seized and described the capture of both tankers as unacceptable. Iran’s Guards made no mention of another ship.

Norbulk, the manager of the tanker Mesdar, said the crew were safe and well.

Iran’s state news agency IRNA quoted a military source as saying that the Stena Impero seized by Iran’s elite forces on Friday had turned off its tracker and ignored warnings from the Revolutionary Guards.

“The tanker had turned off its tracker and ignored several warnings by the Guards before being captured,” an unnamed military source told IRNA.

The same source told IRNA that the tanker’s violations also included sailing in the wrong direction in a shipping lane and ignoring directives.

Britain said it was urgently seeking information about the Stena Impero after the tanker, which had been heading to a port in Saudi Arabia, suddenly changed course after passing through the Strait of Hormuz at the mouth of the Gulf. Tehran has repeatedly threatened to retaliate for the UK’s decision to seize an Iranian tanker suspected of smuggling oil to Syria in violation of EU sanctions this month.

The UK defence ministry said it was investigating the possible interception of the Stena Impero. “We are urgently seeking further information and assessing the situation following reports of an incident in the Gulf,” a spokesperson for the ministry of defence said.

The White House said it was aware of the reports that Iranian forces had seized a British tanker. “This is the second time in just over a week the UK has been the target of escalatory violence by the Iranian regime,” said Garrett Marquis, the National Security Council spokesman. “The US will continue to work with our allies and partners to defend our security and interests against Iran’s malign behaviour.”

Speaking as he left Washington en route to his golf club in New Jersey, US president Donald Trump said the US was “working with the UK” on the incident, noting that a US commercial ship was also moving through the region. US military aircraft were accompanying the vessel through the Strait of Hormuz on Friday night.

Last week, a Royal Navy frigate intervened to prevent Iranian forces impeding the passage of the tanker, owned by UK energy group BP, as it moved through the Gulf.

Iran dismissed those claims that it sought to disrupt the tanker’s passage. But as tensions between the US and the Islamic republic have escalated, Washington and London have blamed Iran for sabotage attacks on six tankers off the coast of the United Arab Emirates in May and June.

Last month, Mr Trump aborted strikes on Iran 10 minutes before they were to be launched after Iranian forces downed an unmanned American spy drone.

Ship tracking data showed the Stena Impero to be sailing towards the Jubail refinery in Saudi Arabia on Friday, where it was expected to load petrochemical products on July 21st.

The vessel then made an abrupt turn after 3pm UK time moving towards the port of Bandar Abbas in Iran, energy data company Kpler said. The vessel has not been submitting a signal for more than two hours. Kpler said it expected “the Stena Impero to remain dark as she approaches the Iranian coastline as the Iranian forces will most likely try to mask her final destination”.

The guards said the tanker had been handed over to Iran’s state-run Ports and Maritime Organisation.

The tanker’s seizure puts the UK and Iran on collision course at a time when Britain has been working with other European countries to de-escalate tensions.

The crisis in the Gulf was triggered by Mr Trump’s decision to unilaterally withdraw the US from the 2015 nuclear accord Iran signed with world powers. Crippling US sanctions have pushed Iran into a deep recession and thwarted its ability to export oil – the republic’s economic lifeline.

Iranian officials have warned that if the republic is not able to export its crude it will disrupt oil and petrochemical traffic through the Strait of Hormuz through which about a third of seaborne oil travels.

In May, Washington dispatched an aircraft carrier strike group to the Gulf citing unspecified “escalatory” activity by Iran. In the weeks since, there have been a number of incidents in the region amid warnings that the increased tensions could lead to a “miscalculation” sparking a wider conflagration.

The UK has not supported the US decision to pull out of the nuclear accord and impose sanctions Iran. It has been working with France and Germany, the other European signatories to the nuclear deal, to save the deal and help Iran counter the economic impact of Washington’s punitive measures.

But the UK’s role has been complicated by its decision to apprehend the Iranian tanker off the coast of Gibraltar this month. British officials insisted they had no choice because the vessel was in European waters and suspected of violating the EU sanctions.

The UK’s Royal Navy has one warship, HMS Montrose, a frigate, in the Gulf as well as four minesweepers operating in the area. A second Royal Navy ship, HMS Duncan, has also been sent to the Gulf to offer additional protection to UK shipping interests. – Copyright The Financial Times Limited 2019 and Reuters