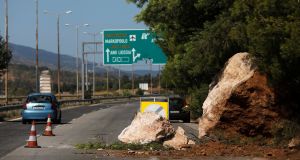 Rocks block part of a road following an earthquake in Aspropirgos, near Athens, on Friday. Photograph: Giorgos Moutafis/Reuters

A magnitude 5.1 earthquake rattled the Greek capital Athens on Friday, briefly knocking out power and telecommunications in parts of the city and sending people running from buildings in panic.

The European Earthquake Monitoring Centre recorded the quake’s epicentre at a point 22km northwest of the city. Its website quoted a witness as saying the quake was “strong but fortunately not very long”, while another compared it to a “strong bounce” lasting about 15 seconds.

The Acropolis, a complex of ancient Greek buildings including the Parthenon located on a rocky hilltop overlooking the capital, was intact, according to the authorities. It is one of the world’s most visited historical landmarks.

Two people were lightly injured by falling debris, health ministry officials said. In the port city of Piraeus, an abandoned structure on a port quay collapsed.

The earthquake occurred at a depth of 15km in an area affected by earthquakes in the past. Greece, along with Turkey, is among the most tremor-prone regions of Europe.

Seismologist Manolis Skordilis told Greece’s Star TV: “The earthquake was close to the surface, which is why it was felt so much.”

A fire brigade official said there had been several calls asking for help in rescuing people trapped in elevators, while some abandoned buildings were damaged.

Athens is a sprawling metropolis of almost four million people. “The situation is gradually subsiding. The city withstood this and can handle it. There is no cause for concern,” said Nikos Hardalias, general secretary for Civil Protection.

About 40 minutes after the earthquake, residents felt another strong tremor, which the EMC rated magnitude 4.4, with an epicentre in the same region at the foot of Mount Parnitha.