Italian government on the brink amid growing hostility between parties 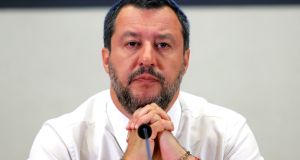 Italian deputy prime minister Matteo Salvini said on Friday he would meet coalition partner and leader of the Five Star Movement Luigi Di Maio amid speculation that the increasingly unwieldy government might collapse.

“We will certainly meet,” said Mr Salvini, who heads the far-right League party and is also Italy’s interior minister. “The problem is not Di Maio, but opposition coming from many Five Star politicians.”

Many League politicians have urged Mr Salvini to quit the year-old coalition and seek early elections, complaining that they can no longer work with the Five Star Movement, which they say is holding up important projects.

Mr Salvini did not say when he planned to see Mr Di Maio, but made clear he sympathised with his parliamentarians. “There is an obvious and total block on proposals, initiatives, projects and infrastructure by some Five Star ministers that hurts Italy, ” he said in his statement on Friday.

“It is nothing personal. Luigi Di Maio is a correct and respectable person, but the ‘no’s and the daily block on work and reforms by Five Star is unacceptable,” he said.

Much of the League’s anger is focused on stalled efforts to hand greater autonomy to the regions – something the party’s wealthy northern strongholds have long demanded, but which Five Star fears will strip funds from their own southern bastions.

Government ministers were to meet later on Friday to discuss the project, with no compromise in sight.

Italian political commentators have long speculated that the window for any government collapse would close on July 20th. After that date, a new election would be pushed too deep into the autumn to enable approval of the 2020 budget, which is the cornerstone of the annual political calendar.

Italy has never held an election in the autumn or winter.

An Italian official, who declined to be named, said president Sergio Mattarella wanted a government in place in October to enact a budget. This meant any early vote would have to be held by early October, or else pushed back to next year.

The same source said there was no meeting scheduled between Mr Salvini and the president and that the interior minister had not let the head of state know whether he wanted a snap election.

Mr Salvini this week dismissed the notion of an election window, saying the coalition could fold at any time.

Mr Salvini might be holding back on an immediate crisis because parliament is currently reviewing a piece of legislation he has championed that would make it much harder for charity rescue boats to bring migrants to Italian ports.

The Bill must be approved by the middle of August and if the government is swept away, it would fall by the wayside.

Hostility between the two coalition parties has grown since European Parliament elections in May, when the League jumped above Five Star to become the largest party in Italy.

Support for it is now approaching almost 40 per cent, and League politicians say they would be able to take charge of the country if early elections were called. By contrast, Five Star risks losing up to half its representatives, polls indicate.

Such forecasts put Mr Di Maio in a difficult position and might make him open to compromise.

Besides the question of autonomy, the League has also expressed frustration about the Five Star transport and defence ministers, Danilo Toninelli and Elisabetta Trenta respectively, accusing Mr Toninelli of blocking major infrastructure projects and Ms Trenta of not doing enough in the battle against immigration.

Mr Salvini criticised both ministers in his statement on Friday and a Five Star source said the League was pushing for a cabinet reshuffle to remove the two from government. – Reuters