City of Goma braces itself for Ebola outbreak

At least 1,365 people have died since the Ebola outbreak began last August 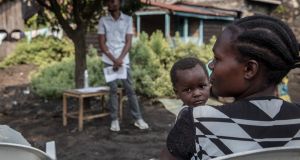 A female volunteer sits with her baby at a educational meeting about Ebola in Goma, eastern DRC. The meeting is part of a community outreach initiative aimed at preparing in case the outbreak spreads to the city. Photograph: Sally Hayden 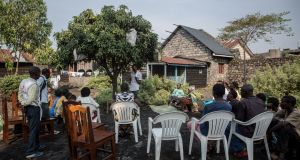 Wellies and gloves hang out to dry after being sprayed with chlorine and water, in Goma’s only Ebola treatment centre. Photograph: Sally Hayden 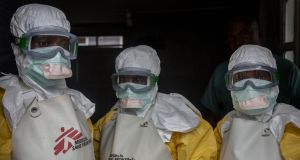 Healthcare workers put on protective gear at Goma’s only Ebola treatment centre. They’re supposed to wear these outfits for a maximum of only 45 minutes, because of how hot it becomes inside. Photograph: Sally Hayden 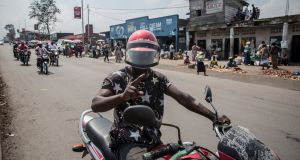 At the back of North Kivu Provincial Hospital in Goma, in the eastern Democratic Republic of the Congo (DRC), a young man in a tank top ducks out of a small ambulance.

He emerges surrounded by the orange fencing, delineating an isolation area. The man stops to check his phone, before a woman in a full protective outfit – including a mask, goggles and white Wellington boots – ushers him towards an examination room. The doctor greeting the man sits behind glass.

A hygienist in a hazardous materials suit disinfects the ambulance with a chlorine spray, as the man nervously takes in his new reality. For the next two days, while he undergoes tests for Ebola, he’ll be kept three feet away from anyone not wearing protection. After that, he will find out if he has been infected with a virus that only one-third of victims survive.

As the second-largest Ebola outbreak in recorded history continues to escalate in the DRC, Goma, a bustling city of one million, is bracing itself for what might happen next. At least 1,365 people have already died since the outbreak began last August.

Though there are no confirmed cases in Goma yet, some medics feel it is a matter of time, given the busy routes from the north. An average of four people a day are now quarantined in the city for displaying Ebola symptoms. Their diagnoses so far have turned out to be myriad of other afflictions, including malaria, typhoid fever and respiratory infections.

“It’s hard to predict the future but we have the best training,” says Dr Elie Mulisi, who has worked since March in Goma’s only Ebola treatment centre. “We feel we’re very well informed. If more cases come, we think we will be ready and give the best of ourselves to tackle the crisis.”

The symptoms of Ebola are common to other illnesses, and include a high fever, headaches, vomiting and diarrhoea. As the virus advances, victims begin bleeding from their nose, mouth and other orifices. If an Ebola case is confirmed, the prognosis is grim.

Goma’s Ebola treatment centre has been open since February, before which the space was used for cholera patients. There are only 22 beds – 12 for suspected cases, while the other 10, for confirmed cases, lie empty.

The space is just 600sq m, though a new centre, which will be more than 16 times its size, is under construction.

Some of the patients admitted to the centre were caught at checkpoints. They’re dotted across the city, manned by volunteers and healthcare workers who point infrared thermometers – almost gunlike – at the temples of passersby; a temperature of 37.5 means you can be quarantined. The thermometers measure heat from the temporal artery, and have been used in previous crises, such as the 2017 plague outbreak in Madagascar, to avoid physical contact between healthcare workers and people who may already be sick.

One of the reasons the outbreak has spread so quickly in the DRC is instability – political and otherwise.

Goma, close to the Rwandan border, has long had an air of danger: both natural and human-made. Mount Nyiragongo, the city’s active volcano, glows at night and could erupt with three days’ notice.

UN peacekeepers have a base at Goma airport, and soldiers patrol the streets with weapons visible beside them. In one week I drove into two large protests, which broke out after opposition leaders were blocked from speaking to their supporters. Dozens of armed groups are active in the region, many fighting over minerals, in which the DRC is rich.

Last September, the World Health Organisation’s head of emergency response, Peter Salama, said the Ebola outbreak in northeast DRC was shaping up to be a “perfect storm”.

On Friday, the same organisation stopped short of declaring the Ebola outbreak a global emergency, instead labelling it an “extraordinary event” of deep concern. This decision came after cases were detected for the first time in neighbouring Uganda.

False rumours about the Ebola outbreak abound. One is that foreigners are deliberately infecting Congolese people with Ebola as a way to make money. These beliefs sometimes spill out into hostility; like a man shouting “Ebola” at white staff in a Médecins Sans Frontières jeep, identified by the medical charity’s distinctive logo on the side.

Last Saturday morning, healthcare workers, local leaders and about 20 volunteers gathered in a compound in Katoy, north Goma – the use of which was offered by its owners to help with the response to the Ebola threat.

Standing at the front was Jonathan Ajeprev, a lean 26-year-old who works with the Association des Jeunes pour le Prevention des Violences. The meeting was part of a community outreach strategy, aimed at making sure locals across the city are informed about Ebola.

Ajeprev went over the basics of the virus, before talking through good hygiene practices.

“We don’t have soap and chlorinated water, we just use ashes to wash our hands,” piped up a female attendee. “Soap costs nothing, maybe 50 cent, please buy it,” responded Ajeprev.

“Why would we report our children and have them sent to hospital alone?” asked another woman. “If the child is sick, the mother can’t really go with him, but we will take good care of him,” Ajeprev said.

He explained there was artificial milk for babies infected with Ebola. Women who had already developed antibodies, from surviving the virus, would care for the children until they’re healthy again, he said.

At the end of the session Ajeprev read out a hotline the volunteers can call if they want to report anything.

“When you listen to your neighbours it’s easier to get the message than if it’s someone you don’t know,” said Clarisse Amunazo, a Congolese health promoter working with MSF.

Nicolas Peissel, the medical charity’s emergency co-ordinator for DRC, said it had been been working on readying Goma for more than six months now. “Our main strategy is a preventative one – setting up a comprehensive preventative system... We’re learning lessons and best practices from organisations in the north.”

Peissel said MSF was working with the government health ministry at “reinforcing the surveillance system, ensuring there was adequate capacity to manage suspected cases and establishing a community engagement programme, as trust with the community is crucial”.

Separately, local authorities and the Red Cross have earmarked a burial site in a Goma cemetery, and are already carrying out what they call “safe and dignified burials” for suspect cases inside the city.

For locals, the Ebola outbreak also presents an opportunity to find work. Outside MSF’s gates, on the shores of Lake Kivu, a throng of people gather to examine the latest Ebola-related job advertisements, seeking people who are “good under stress”, “culturally sensitive”, have “a sense of service” and are “flexible”.

Those outside echoed what other Congolese who spoke to The Irish Times said: while Ebola is frightening, it’s not always going to be top of their concerns. Many struggle to feed their families, support their children’s education, and feel like they’re in a safe environment.

“A lot of the priorities of the communities are not necessarily Ebola,” says Kate Learmonth, health co-ordinator for the Red Cross. “There’s all this money coming in to try to stop Ebola, but [people’s] priority is the violence and food and water and school for their children.” The response of the relevant agencies needs to be about more than Ebola, she says.