US Senate to vote on doubling funding to Northern Ireland body 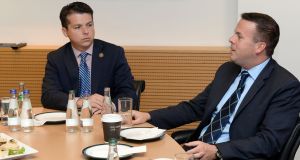 A proposal to double US funding for the International Fund for Ireland (IFI) to $1.5 million has passed the House of Representatives.

The amendment was proposed by Brendan Boyle, congressman for Pennsylvania, and comes amid renewed interest on Capitol Hill in the political situation in Northern Ireland. The proposal will now be considered in the US Senate.

The International Fund for Ireland was established in 1986 to promote economic advancement in Northern Ireland and to encourage dialogue between nationalist and unionist communities.

Funded mostly by the United States government, it has been a central strand of America’s engagement with Northern Ireland for three decades.

Speaking to The Irish Times, Mr Boyle said that Brexit was one of the primary reasons why the extra funding was being sought.

“The implications of Brexit on Northern Ireland, coupled with the absence of a functioning executive, have again turned focus on the region, which has always been of interest to the United States,” he said.

Mr Boyle added that he was encouraged that fellow members of congress had backed the amendment.

“Once again, the Border is in danger of becoming a significant barrier, physically and psychologically, to harmonious relationships that have been delicately fostered over the past few decades.”

The amendment was attached to a spending Bill passed in the House of Representatives on Wednesday which includes funding for foreign spending.

Since its inception more than 30 years, ago, more than €912 million has been provided to the fund, supporting more than 6,000 projects across the island of Ireland.

Among the recent projects backed by the fund are Chance, an 18-month cross-community scheme that helps young people in the Border counties who are not in full-time education or training to make the transition into work or further study.

A similar two-year programme in North Down aims to increase employment levels for young people with low educational attainment.

Both are part of the fund’s “Personal Youth Development Programme” which reaches out to young people deemed to be vulnerable to recruitment by organisations opposed to the peace process.

More than 1,000 young people have taken part in the youth development schemes over the past year.

The IFI also runs the Peace Walls Programme (PWP), which fosters dialogue about how best to remove or alter barriers in communities.

Wednesday’s development comes as a new scholarship programme was announced in honour of former US president Bill Clinton.

Three transatlantic PhD scholarships are to be created as part of a new peace and conflict resolution programme being developed by Dublin City University and Ulster University with the University of Massachusetts.

The research positions were announced at an event, hosted by the Clinton Foundation in New York, to unveil the portrait of Mr Clinton created by Northern Ireland artist Colin Davidson.