Candidates for the British Conservative Party leadership race said they were ready for a last day of voting that will whittle down the contest to the final two who will then face a postal ballot of the party membership. Video: Reuters 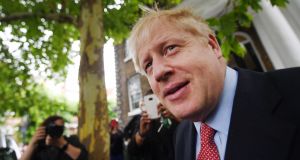 Boris Johnson added to the impression of shiftiness by backing away from a promise to cut taxes for high earners. Photograph: Andy Rain/EPA

Rory Stewart’s elimination from the Conservative leadership race has robbed the contest of some of its excitement and spared Boris Johnson from facing his most formidable potential rival.

Rumours fizzed around Westminster on Wednesday night about how dark forces around Johnson had manipulated Stewart’s vote upwards on Tuesday to eliminate Dominic Raab, only to allow it to fall again on Wednesday to drive Stewart himself out of the race.

The truth may be simpler: Stewart’s below-par performance in Tuesday’s BBC debate knocked off some of the stardust that had brought his campaign further than anyone expected. And Conservative MPs, convinced that Johnson is the inevitable winner, feared that a tough, month-long contest against Stewart would damage his premiership before it began.

The same consideration could inform the choice MPs make on Thursday, when they decide between Jeremy Hunt and Michael Gove as the candidate to face Johnson. If Johnson is destined to win, is it better to choose a gentle contest with Hunt or a more testing trial against Gove?

Raab’s elimination from the contest has left Johnson without a rival to the right on Brexit, which ought to give him more room for manoeuvre on the issue. But Johnson’s retreat during Tuesday’s debate from a firm commitment to leaving the European Union on October 31st has exposed him to attack from other candidates and raised the suspicions of hardline Brexiteers.

He added to the impression of shiftiness by backing away from a promise to cut taxes for high earners, suggesting that he just wanted to start a debate about it. He has drawn support from such a broad base in the parliamentary party that he is bound to disappoint some of the MPs who voted for him this week.

SNP Westminster leader Ian Blackford dipped into the deep well of Johnson’s outrageous statements in newspaper columns over the decades to denounce him as a racist in the Commons. More damaging was Wednesday’s intervention by Richard Ratcliffe, whose wife Nazanin Zaghari-Ratcliffe is on hunger strike in a Tehran prison, partly because of Johnson’s mistakes in handing her case.

Ratcliffe’s denunciation of Johnson as a potential threat to national security moved the spotlight on to his recent tenure as foreign secretary. And it reminded Conservative party members that, in high office, Johnson’s lack of discipline is not just the charming idiosyncrasy of a lovable rogue but a failing with potentially serious consequences.