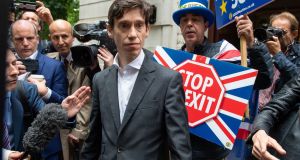 Rory Stewart: “I remain deeply committed to you and to this country.” Photograph: Dominic Lipinski/PA Wire

Conservative MPs will on Thursday choose between three candidates to face Boris Johnson in a leadership contest that will be decided by the party membership. International development secretary Rory Stewart on Wednesday became the latest candidate to be eliminated after he won just 27 votes, 10 fewer than in Tuesday’s ballot.

Mr Johnson increased his lead, winning 143 votes, up from 126 in the last round. Foreign secretary Jeremy Hunt remained in second place with 54 votes, an increase of eight, and environment secretary Michael Gove came third with 51 votes.

Home secretary Sajid Javid leapfrogged Mr Stewart to remain in the contest with 38 votes. Two ballots are scheduled on Thursday, with the result of the final vote due to be announced at 6pm.

Mr Stewart, who ran an insurgent campaign that brought him from a rank outsider to a viable contender, said he was surprised to have lost 10 votes in 24 hours.

I am so moved & inspired by the support I have received over the last few weeks - it has given me a new faith in politics, a new belief in our country. I didn’t get enough MPs to believe today - but they will 🙂 I remain deeply committed to you and to this country. #RoryWalksOn

Thank you @RoryStewartUK for the positive impact you have had on this campaign. You’ve injected it with real humility, authenticity, and pragmatism. Like many I look forward to seeing the contribution you will make to our party and the country in the future.

“The reality is you never know what MPs get up to in a secret ballot. They clearly decided that they were going to back a winner and they’re going to go in other directions, he said.

Mr Hunt suggested on Wednesday that Mr Johnson could not be trusted to keep his word on Brexit, accusing him of backsliding during Tuesday’s BBC debate on his promise to take Britain out of the EU by the end of October.

“Boris has made a big play of saying we’ll leave deal or no deal on October 31st. Yesterday, frankly, he suggested he wouldn’t be so absolute in that. I’m not entirely sure what he believes, having listened to him last night,” Mr Hunt said.

During Tuesday’s debate, Mr Johnson said his mistakes in talking about Nazanin Zaghari-Ratcliffe, a joint British-Iranian citizen jailed in Tehran, had made no difference to her fate. But her husband Richard Ratcliffe said Mr Johnson’s mistaken assertion that she was training journalists had been used to justify further charges. And he said the former foreign secretary briefed a newspaper that Britain would repay a £400 million debt to Iran from the 1970s but then failed to follow through.

“Expectations were raised. He said no stone was going to be left unturned and obviously that did not happen. She remains in prison and others have been arrested, and so we have gone from ‘no stone unturned’ to ‘not my fault’,” Mr Ratcliffe told the BBC.

“The member has called Muslim women ‘letterboxes’, described African people as having ‘watermelon smiles’, and another disgusting slur that I would never dignify by repeating. If that’s not racist, Mr Speaker, I don’t know what is. Does the minister honestly believe that this man is fit for the office of prime minister?” he said.