A politician murdered ... a neo-Nazi suspect silent in his cell 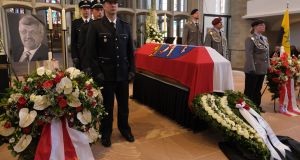 It was 2.30am on Saturday when a 50-man SWAT team raided a home in the western German city of Kassel. A woman and her two young children living inside left quietly, a neighbour in their housing estate reported, while her 45-year-old husband, Stephan Ernst, caused a “hullabaloo”.

The reason for this became public hours later: Stephan Ernst was being held in connection with postwar Germany’s first suspected neo-Nazi murder of a politician. As German investigators admit cautiously, he may not have acted alone.

Two weeks previously, police had rushed to another home, that of Walter Lübcke. The moustachioed 65-year-old Christian Democratic (CDU) politician was local government head in Kassel. Just after midnight on June 2nd he was found lying in a pool of blood on the terrace of his home. He had been shot in the head. He died in hospital at 2.45am.

His apparent crime: suggesting in 2015 that anyone who had a problem with Germany taking in refugees was free to move elsewhere.

Extensive forensic searches of the crime scene and the dead man’s clothes turned up third-party DNA traces. They ran the DNA through the police database and turned up one match: Stephan Ernst.

Kassel police recognised the name immediately: a Bavarian-born neo-Nazi, living locally. As a young man he was arrested for stabbing immigrants, and served time for planting a pipe bomb outside a refugee home. But he appeared to have settled down after becoming a father: his last run-in with the law was a riot in Dortmund in 2009.

Now in custody, his silence has set alarm bells ringing across Germany. Volker Bouffier, state premier of Hesse and a close friend of Lübcke, said: “It seems to me that it would be rash to settle on a lone attacker.”

A neighbour of the dead politician who heard the fatal gunshot reported seeing two cars driving erratically a short time later. One was a Volkswagen Caddy, the kind of vehicle registered to Stephan Ernst’s wife, and another vehicle the eyewitness couldn’t identify.

Investigators are exploring whether Ernst acted alone, was a “sleeper” that was reactivated by a formal neo-Nazi network, or a member of a looser group organised through social media and messaging apps.

German domestic intelligence has some 24,000 registered far-right extremists on its books. Of the 1,500 in Hesse, almost half are considered violent, with links to groups such as “Combat 18” and “Combat Brigade Adolf Hitler”.

Far-right experts have long predicted a reawakening of these groups, as attention wanes for more mainstream anti-immigrant protest groups like Pegida, organiser of Monday-night protest marches in Dresden.

Now German opposition politicians have demanded a “quick, thorough and complete” examination of all far-right structures – including uneasy suspicions of police links. The state of Hesse alone currently has 38 open investigations into police suspected of having far-right extremist sympathies. Green Party co-leader Robert Habeck has called for a check “if there are links to other cases such as the NSU (National Socialist Underground)”.

The National Socialist Underground, a three-member radical cell, was exposed after a botched bank robbery eight years ago. Two members killed themselves and a third was arrested, revealing a decade-long killing spree of nine immigrants and a young policewoman. Police and intelligence insist they knew nothing of the cell until 2011.

Subsequent trials and parliamentary investigations left dozens of unanswered questions about dubious intelligence service informers with links to the group and firm suspicions the NSU was assisted by a wider support network – with one trail leading to Kassel.

German regional politicians are most alarmed now. Since 2015 they have been on the front lines of verbal and physical abuse from voters angered by the liberal migration policy of chancellor Angela Merkel.

Unlike her, they don’t live in a high-security bubble. Henriette Reker, the pro-asylum mayor of Cologne stabbed by a neo-Nazi in 2015, says the latest – fatal – attack on a politician by a suspected neo-Nazi has left her shocked, but not surprised.

“They are prepared to go all the way; that must make us alert but not afraid,” she said. “Those who threaten our free society have to learn that we will not shift one centimetre.”