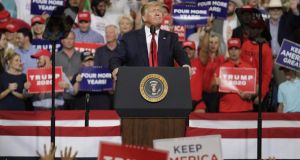 US president Donald Trump pauses while speaking during a rally in Orlando, Florida, US, on Tuesday, June 18th, 2019. For one night in a packed arena in Orlando, Trump tried to recapture the insurgent energy and anything-might-happen feel of the campaign that fueled his bid for the White House four years ago. Photographer: Marco Bello/Bloomberg

The Trump administration rolled back one of the signature climate change policies of the Obama era on Wednesday, giving individual states the right to set emissions.

The Environmental Protection Agency (EPA) announced details of its “Affordable Clean Energy” rule, which undoes former US president Barack Obama’s 2015 Clean Power Plan. While the Obama law encouraged companies to move away from coal to other sources of energy and renewable power, the new rules instead encourage coal plants to improve efficiency through technological advances.

But environmental campaigners fear that this will lead to a sharp reduction in emissions savings over the coming years.

Announcing the new regime at an event in West Virginia attended by coal miners dressed in uniform, EPA chief Andrew Wheeler argued that the Obama-era regulation was an overreach of federal power. Several states have already successfully sued over the Clean Power Plan, arguing that they have the right to set emissions targets.

“Our ACE rule will incentivise new technology which will ensure coal plants will be part of a cleaner future,” Mr Wheeler said. “States will be given the flexibility to design a plan that best suits their citizens’ environmental and energy needs.”

Under the new rule, companies will be expected to reduce their carbon emissions by 35 per cent compared to 2005 levels – a much smaller reduction than experts deem is necessary to seriously target climate change.

Mr Trump campaigned in 2016 in part on the promise of returning jobs to coal-mining states such as Pennsylvania and West Virginia. Speaking at Wednesday’s event, White House acting chief of staff Mick Mulvaney told the audience: “This is yet another example of the president doing exactly what he said he would do when he ran for office.”

The announcement of the administration’s latest climate change policy came hours after Mr Trump launched his 2020 election campaign at a rally in Florida, during which he highlighted what he claimed were his achievements in the field of energy.

“We’ve ended the last administration’s cruel and heartless war on American energy,” he told supporters at the Amway Centre. “What they were doing to our energy should never be forgotten. The United States is now the number one producer of oil and natural gas anywhere in the world.”

In his first official speech of the 2020 campaign, Mr Trump returned to many of the themes of the 2016 election. This included his promise to build a wall on the southern border with Mexico, as he cast Democrats as the party of “open borders” who will betray the American middle class.

In a sign that he intends to court the evangelical and conservative vote, he highlighted the number of conservative judges appointed since his election and also referenced recent changes in abortion provision across the country, claiming that “virtually every top Democrat” supports “ripping babies straight from the mother’s womb”.

Mr Trump also hit out at the Mueller investigation which overshadowed the first two years of his presidency, dismissing it as “the greatest witch hunt in political history”.

“The only collusion was committed by the Democrats, the fake news media, and their operatives, and the people who funded the phony dossier: Crooked Hillary Clinton and the DNC,” he said to cheers.

Within hours of the event, the Republican National Committee announced that the president had raised $25 million in less than 24 hours to coincide with the campaign launch, much of which came from individual small donors. The president also attended a private fund-raiser at the Trump National Doral hotel in Florida which was expected to raise approximately $5 million.